Almost all cases of esophageal duplication are detected during gestation by fetal ultrasound or during the first years after birth; complications are rare in adults (3,4). Based on its location, position, and size, esophageal duplication can cause different symptoms. The most common are digestive symptoms: substernal pain, dysphagia, vomiting or respiratory, cardiovascular symptoms such as dyspnea, arrhythmias. However, many patients with esophageal duplication are asymptomatic and their disease is diagnosed fortuitously. Barium esophagogram, esophageal computed tomography (CT), or esophageal endoscopic ultrasound (EUS) can help to diagnose this disease before surgery, but histopathology is needed for definitive diagnosis (5,6).

Treatment of symptomatic esophageal cysts can be either surgical or endoscopic. Although debated in asymptomatic adult patients, excision can be proposed because of potential incidents or complications: inflammation, bleeding ulcer, leak, or very rarely, cancer (7). Surgical resection of the cyst is indicated for esophageal duplication cysts while esophagectomy is required for esophageal tubular duplication. However, some authors have reported successful results after endoscopic fenestration or resection (5,8,9).

Until now, almost all reports concerned traditional open surgery, and there are few centers applying endoscopic surgical techniques in treating this disease. In this report, we discuss the current diagnostic modalities as well as the advantages of minimal access (laparoscopic or thoracoscopic) surgery in the treatment of esophageal duplication. We present the following cases in accordance with the CARE reporting checklist (available at https://ales.amegroups.com/article/view/10.21037/ales-22-7/rc).

This 31-year-old male patient, with no antecedent medical history, was hospitalized because of increasing dysphagia which started 4 months ago. An irregular stricture with a smooth border in the middle third of the esophagus was revealed by barium esophagogram. Esophageal endoscopy detected an extrinsic tumor narrowing the esophageal tube; the over-lying esophageal mucosa was smooth. CT showed a well-defined 4 cm × 6 cm cystic tumor located in the middle third of the esophagus (Figure 1). Endoscopic ultrasound detected a 5-cm cystic tumor with clear borders, located in the esophageal wall, underneath the esophageal mucosa, 30 to 35 cm below the superior dental arch. 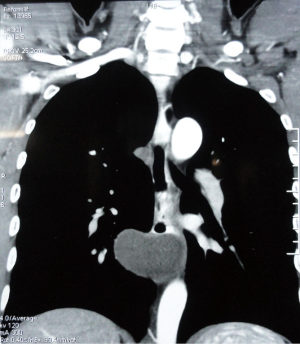 The patient underwent surgery on June 13th, 2018 with the preoperative diagnosis of middle third esophageal cyst.

A soft 5 cm cystic mass was found on the right posterior wall of the middle third of the esophagus, immediately inferior to the azygos vein arch (Figure 2). The mass was easily removed through a longitudinal incision on the esophageal muscular wall. The mucosa was intact. The muscular layer of the esophagus was closed with single layer interrupted 4.0 Vicryl sutures. The operation was uneventful with no intraoperative and postoperative incidents or complications over the 85 min span. The patient was discharged from the hospital 8 days after thoracoscopy. The pathology report confirmed that the resected 4 cm × 5 cm cyst was removed in totality, the specimen was intact, with smooth walls and the cyst was filled with cloudy yellow mucous fluid. Histopathological findings revealed that the cavity was lined by ciliated epithelium; the cyst wall consisted of two layers of smooth muscle without cartilage. Conclusion: esophageal duplication cyst. 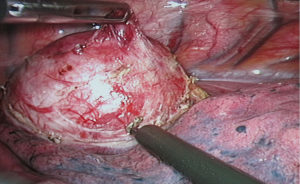 A 37-year-old male patient with no medical and surgical history, presented with a one-month history of dysphagia. He reported no weight loss and was in good body condition. Esophageal endoscopy showed an extrinsic protrusion into the esophageal lumen of a 2.5 cm mass, under a smooth uninterrupted mucosa, located about 37 cm from the upper dental arch. Thoraco-abdominal CT revealed a cystic sized 2 cm × 3 cm located in the lower third of the esophagus, apparently benign and non-invasive. Esophageal endoscopic ultrasound showed a well-defined 3 cm hypoechoic mass under the esophageal mucosa and confirmed the distance from the upper dental arch (Figure 3). 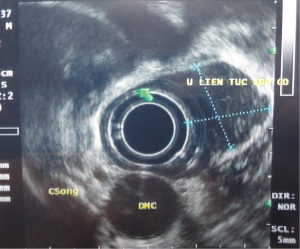 The patient underwent surgery on August 22th, 2018 with the preoperative diagnosis of benign esophageal cyst of the lower esophagus.

After opening the omental bursa through the lesser omentum, the right and left crus of the diaphragm and the posterior wall of the abdominal esophagus were isolated and exposed. The phrenoesophageal ligament was divided, and ultrasonic dissection was pursued to release the esophagus from esophageal hiatus and mediastinum, caution exercised to conserve the anterior and posterior vagus nerves. A soft 3 cm mass was located on the left wall of the esophagus, close to the gastric cardia. A longitudinal incision of the esophageal muscle was made, providing access and allowing dissection of the cystic mass from the esophageal wall. The surgical esophageal muscular wall incision was closed with 4.0 Vicryl single layer interrupted stitches under intraoperative laparoscopic vision to ensure no perforation on the esophageal mucosa. Subsequently, an antireflux valve (Toupet fundoplication) was constructed (Figure 4). The operation lasted 105 min. No intraoperative and postoperative complications were noted. Postoperatively, the patient recovered well and was discharged 7 days after surgery. Postoperative pathological results confirmed a 3 cm cyst with a smooth-muscle wall whose lumen was lined by ciliated epithelium. Conclusion: esophageal duplication cyst. 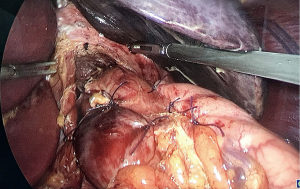 Both patients were seen 3 months, 6 months, and 1 year after surgery. The postoperative results were satisfactory: both patients were able to digest food normally without dysphagia or choking. Neither had stricture or symptoms of gastro-esophageal reflux.

All procedures performed in this study were in accordance with the ethical standards of the institutional and/or national research committee(s) and with the Helsinki Declaration (as revised in 2013). Written informed consent was obtained from the patients for publication of this case report and accompanying images. A copy of the written consent is available for review by the editorial office of this journal.

These include respiratory symptoms when lesions are located in the upper third of the esophagus: persistent cough, difficulty breathing, wheezing, pneumonia… digestive symptoms such as dysphagia, choking, vomiting… when the lesion is large and compresses the esophagus, arrhythmia occurs when the lesion is located in lower third of the esophagus near the heart, and rarely upper gastrointestinal tract bleeding due to bleeding ulcers in the cyst, and even mediastinitis due to perforation of the cyst.

In our study, both patients were diagnosed with the esophageal duplication disease in adulthood with gradually increasing dysphagia. Because the tumor was located in the middle third and lower third of the esophagus and was relatively small in size, there were no respiratory and cardiovascular disorders.

Imaging has an important role in the diagnosis of esophageal duplication. The most widely used include chest X-ray, esophago-gastro-duodenal follow-throughs, chest computed tomography and esophageal endoscopic ultrasound (6).

On chest X-ray, the most common picture is a round or oval opacity with smooth margins in the posterior mediastinum, usually in the lower third of the esophagus. In addition, chest X-ray can detect malformations of the spine such as spina bifida, kyphoscoliosis... When there is a blurry mass in the posterior mediastinum accompanied by a congenital malformation of the spine on chest X-ray, esophageal duplication should be considered.

Chest computed tomography is a commonly used method to assess mediastinal tumors in general and esophageal cysts in particular. Not only does chest computed tomography with contrast enhancement allow assessment of the location, size and nature of the cyst but it also helps to evaluate the nature of the esophageal duplication cyst wall, contrast uptake of the cystic wall similar to the wall of the esophagus is an important sign to help diagnose esophageal duplication cyst.

EUS has recently emerged as a powerful new tool in the evaluation of duplication cyst. EUS can clearly define the intramural and extramural extent of the lesion as well as distinguish between cystic and solid masses (12).

On EUS, esophageal duplication cysts usually presents as a homogenous hypoechoic mass with multi-layered wall and well-defined margins, although sometimes the lesion can manifest as an anechoic cyst if considerable central fluid is present (13).

Both of our patients had symptoms leading to a full range of imaging methods to help diagnose the disease.

Duplication cysts are usually found incidentally in asymptomatic patients. However, they become symptomatic when complications such as infection, displacement of adjacent organs, hemorrhage, rupture and neoplasia develop. Surgical excision is usually recommended immediately upon cyst discovery, whether symptoms are present or not (14,15). Noguchi reported a case of successful laparoscopic surgery of an asymptomatic esophageal cyst in a 26-year-old patient who remained asymptomatic at 3 years follow-up (15). On the other hand, surgical intervention for asymptomatic cyst can also lead to long-term complications such as heartburn and reflux esophagitis and can carry a mortality as high as 1% (14). Endoscopic management, opening the anomaly into the main esophagus through a flexible endoscopic has been reported with good initial results (2,8). Another treatment strategy is observation in asymptomatic individuals. Versleijen et al. described a case in which a patient with asymptomatic esophageal duplication cyst (diameter 1.1–4.1 cm) was followed for 13 years and routine EUS did not show cyst growth. These authors advocated EUS surveillance over surgery in asymptomatic patients, although the cost implications of such an approach have not been formally studied to date (16).

Both patients in our study were symptomatic. Both had cystic type duplication and absence of communication with the main esophagus. No other congenital malformation was found. While some authors believe that surgical intervention should only be entertained when the disease is symptomatic or causes complications (3), we, as others, consider that surgery is necessary due to the risk of complications such as ulceration, perforation, inflammation... even the risk of malignant degeneration (4,5), even when the disease is asymptomatic, especially now with the development of minimal access surgery. We systematically use laparoscopy (or thoracoscopy) for benign pathologies of the esophagus.

About 50% of cases of esophageal duplication are associated with another malformation, especially the spine and other parts of the gastrointestinal tract (2,5). Thoracoscopy is indicated for lesions in the upper and middle third of the esophagus, and laparoscopy is indicated for lesions in the abdominal esophagus or the lower portion of the thoracic esophagus near the cardia (9).

Alimentary tract duplication was described first by Ladd in 1937, and applied the term to congenital lesions having three characteristics: (I) the presence of a well-developed coat of smooth muscle, (II) an epithelial lining representing some type of intestinal tract mucosa, and (III) intimate anatomic association with some portion of the gastrointestinal tract (17). The histopathological criteria for classifying a foregut duplication cyst as an esophageal duplication cyst were developed by Arbona et al. (1) include attachment to or inclusion of the cyst to the esophageal wall, presence of two muscular layers, and squamous, columnar, cuboidal, pseudostratified, or ciliated epithelium lining.

The post-operative pathology results of our two cases met the esophageal duplication cyst criteria, helping to confirm the diagnosis of the disease.

Reporting Checklist: The authors have completed the CARE reporting checklist. Available at https://ales.amegroups.com/article/view/10.21037/ales-22-7/rc

Conflicts of Interest: All authors have completed the ICMJE uniform disclosure form (available at https://ales.amegroups.com/article/view/10.21037/ales-22-7/coif). AF serves as an Editor-in-Chief of Annals of Laparoscopic and Endoscopic Surgery. The other authors have no conflicts of interest to declare.

Ethical Statement: The authors are accountable for all aspects of the work in ensuring that questions related to the accuracy or integrity of any part of the work are appropriately investigated and resolved. All procedures performed in this study were in accordance with the ethical standards of the institutional and/or national research committee(s) and with the Helsinki Declaration (as revised in 2013). Written informed consent was obtained from the patients for publication of this case report and accompanying images. A copy of the written consent is available for review by the editorial office of this journal.