Open surgery has been replaced by laparoscopy-assisted surgery with the developments in minimally invasive surgery in colorectal diseases. This also brought total laparoscopic surgery to the agenda with the increase in learning curve and equipment support, and this technique has started to be preferred more than laparoscopy-assisted surgery. However, although the surgical procedure is performed laparoscopically, a minimal 5–6 cm incision is needed for specimen extraction and anastomosis, which does not adequately provide the expected optimal patient comfort because of incision-related effects. This search brought the natural orifice specimen extraction (NOSE) technique to the agenda for the first time in 1993 (1). The laparoscopic surgical procedure is completed using natural openings in the NOSE technique, there is no need for a separate abdominal incision for specimen extraction and bowel anastomosis. It was found that the duration of hospital stays and recovery times are shortened by protecting patients from complications related to abdominal incision (2). After being used in segmental colon resections, NOSE was used with increasing frequency in total-subtotal colectomy with more segments. This method, which was reported firstly by Dozois et al. in a hereditary nonpolyposis colorectal cancer (HNPCC) patient in 2008 (3), included literature reports that turned from case reports to clinical studies over the years. There are no studies with large patient series on the combination of laparoscopic total colectomy and NOSE. For this reason, the purpose of the present paper was to comment on the technique by collecting the results of patients who underwent total colectomy and NOSE combination in the literature. We present the following article in accordance with the PRISMA-ScR reporting checklist (available at https://ales.amegroups.com/article/view/10.21037/ales-22-20/rc).

Review of the literature electronic searches of the PubMed/Medline and Google Scholar databases were carried out between 1960 and May 14, 2022 using the key words (transvaginal OR transanal OR transrectal) AND ((colon OR colonic) AND (resection OR resections) OR colectomy) AND (total OR subtotal).

All of the patients who had laparoscopic total colectomy and transanal or transvaginal specimen extractions were included. Patients who underwent laparoscopic total proctocolectomy or segmented colectomies were excluded. No restrictions were made on language, country, or journal. The “related articles” links of the databases and the references of all of the selected relevant articles were cross-checked. If the articles were obviously irrelevant to the aim of this analysis they were excluded. Articles that met our inclusion criteria were obtained in their full text form for assessment. If more than one article reported data from the same study, the most recent and complete articles were included. The reasons for excluding studies were recorded in the flow chart (Figure 1). Any disagreements during the study selection and analysis were solved by reviewer discussion and a consensus was obtained. 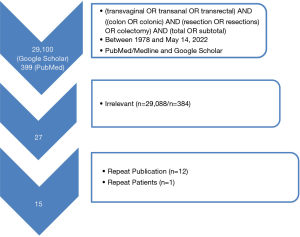 A computer program including a spreadsheet was used for the records (Excel). Basic descriptive statistics were used for analysis.

The literature search using the search terms listed above yielded a total of 29,100 articles from Google Scholar and 399 articles from PubMed. Of these, 15 articles (3-17) met the inclusion and exclusion criteria of the study and were chosen for further, detailed review. Detailed review of these articles revealed one study (17) reporting cases that were included in other series. Thus, 14 articles (3-16) were included in the final analysis after accounting for articles reporting redundant sets of patients and those failing to adequately meet the definition of NOSE. Although this process, which started in 2008, did not receive sufficient attention until 2018, it was later seen that there was an increase in the number of publications reported after 2018. Although there were mainly case reports until these years, clinical studies reported that the number of patients increased since 2018 (9,10,13,14). Table 1 lists reported NOSE cases by author and year, with the largest overall, single-center experience consisting of 13 total colectomies by Gundogan et al. (9) and Alemrajabi et al. (14) in Turkey and Iran. A total of 71 NOSE cases meeting these criteria were reported in the literature, the majority of which were transanal procedures (n=53), followed in frequency transvaginal (n=6) procedures, accounting for 90%, and 10% of all NOSE procedures, respectively (Table 2).

*, conversion to Pfannenstiel incision because of mesenteric tear during extraction. NA, not available.

Although all procedures were performed laparoscopically, robotic total colectomy was seen in one publication (12). Trocar placement in NOSE techniques is also similar to conventional laparoscopy and variable amongst the publications studied. Most authors used five trocars (4,8,9,16) some used a six-port configuration (7,12,14) and some only four (3). Although the resection steps are carried out the same as with conventional laparoscopy, there are differences between the authors in the anastomosis and specimen extraction stages.

After the end of the conventional laparoscopic resection, the distal resection is determined and separated with the help of a stapler. Then, the piece is removed by reopening the distal stump in the transanal group and by colpotomy in the transvaginal group. However, in one article, Pfannenstiel incision had to be used because of the detachment of the mesentery during transvaginal removal of the piece (15).

When the operation times were evaluated in this respect, it was found that 455 min (3) in the first case report in 2008, although the last reported operation time was 130±32 min (14). The operation time of the patients is in the range of 120–500 min. With the increased number of patients, it was determined that the duration of the operation gradually decreased in clinical studies. However, it was also seen that the operation time (334±62 min) in the case reports of Chen et al. (12) did not comply with this decreasing trend, and it was considered that the reason for this was the robotic procedure. When the amount of intraperative bleeding was evaluated, it was found that the value reported as 400 cc in the first case report was in the range of 100–200 cc (6,9,12) in recent years, possibly because of the increased number of existing case series. When the duration of hospitalization was evaluated, the predominantly reported hospitalization period was in the range of 5–9 days (3,9,11,14,15). However, although there were authors (7) reporting hospitalization for 2 days, there are also authors (12) who reported hospitalization for 11 days.

Postoperative early complications were found in 10 (20%) of the patients. Reoperation was needed in only 3 (6%) of these patients. The most common complication was postoperative ileus (3,12) in three patients. Patients requiring reoperation were because of fistula originating in two J-pouch and abdominal hemorrhage in one. Primary repair and proximal diversion were performed on J-pouch fistulas, and laparoscopic bleeding control in the abdominal hemorrhage patient. Other complications were followed and treated non-operatively. It was found that the pain scores were better in the NOSE group in the articles that were analyzed with postoperative conventional laparoscopy (9). No early mortality was reported for any of the patients.

There has been a breakthrough in minimally invasive surgery with laparoscopy, which has been used since the beginning of the twentieth century. Then, Single Port (SILS)-Transanal Procedures (TAMIS)-Natural Orifice Surgery (NOSE, NOTES) came to the agenda with less surgical trauma and the concept of optimal surgery. NOSE has been used with increasing frequency in colorectal surgery since the beginning of the 21st century. Although slowly, total colectomy, which includes all colonic segments, also participated in this process and literature reports consisting of case reports evolved into clinical studies. It was observed that benign diseases were generally preferred in patient selection, but malignant diseases have been added to the patient selection criteria in recent years. The transanal route was preferred because it is often included in the current surgical procedure and there are patients who do not have a gross mass. Also, the transvaginal route, which allows the extraction of a larger volume, was also used. Frequent use of the transanal extraction field eliminated the female gender requirement and allowed the patient population to be expanded. Although the evidence value is low, studies show that incision-related complications decreased and postoperative patient comfort increased. It was considered that the progression trend was slower because of the complexity of the technique when compared to other segmental colon resections. The necessity and feasibility of studies with larger patient participation were understood in this review.

Provenance and Peer Review: This article was commissioned by the Guest Editor (Cuneyt Kayaalp) for the series “Natural Orifice Specimen Extraction in Colorectal Surgery” published in Annals of Laparoscopic and Endoscopic Surgery. The article has undergone external peer review.

Reporting Checklist: The authors have completed the PRISMA-ScR reporting checklist. Available at https://ales.amegroups.com/article/view/10.21037/ales-22-20/rc).

Conflicts of Interest: All authors have completed the ICMJE uniform disclosure form (available at https://ales.amegroups.com/article/view/10.21037/ales-22-20/coif). The series “Natural Orifice Specimen Extraction in Colorectal Surgery” was commissioned by the editorial office without any funding or sponsorship. The authors have no other conflicts of interest to declare.