Obesity and associated comorbidities including diabetes, cardiovascular disease, and non-alcoholic steatohepatitis are a growing global problem (1). According to the World Health Organization, 650 million people suffer from obesity and each year, at least 4 million people worldwide die prematurely due to the consequences of overweight or obesity (2). Obesity is not only associated with adverse outcomes for patients, but also imposes an enormous economic burden on the health care system (3). In Germany alone, the annual direct cost of obesity for the health care system is about 29.39 billion euro (4). For people with morbid obesity (BMI >40 kg/m2), the impaired mobility reduces chances to lose any excess weight and the chances of achieving and maintaining a sufficient weight loss with lifestyle changes. In fact, many experience an increase in weight over time (5). At present, bariatric surgery is the most effective treatment for morbid obesity (6). Surgery also has beneficial effects on diabetes and other manifestations of the metabolic syndrome (7). Bariatric surgery is a safe procedure and the risk of serious complications is comparable to elective cholecystectomy (8). The two predominant types of procedures performed are the laparoscopic Roux-Y-gastric bypass (RYGB) and sleeve gastrectomy (SG) (9). Adequate weight loss also known as therapeutic success is generally defined as ≥50% excess weight loss (EWL) within the first postoperative year (10,11). Several factors including age, gender, and comorbidities are potential predictors of weight loss, but previous evidence is equivocal (12,13). A more profound knowledge on the characteristics of patients that will sufficiently profit from bariatric surgery is of great importance to not just select patient groups for bariatric surgery, but also to estimate the timepoint when patients profit best from the intervention. This can especially be important in countries where insurance companies grant coverage for bariatric surgery. Furthermore, some patients do not profit form bariatric surgery alone. In these patients, further interventions as intensified nutritional counselling or psychological support may further improve their outcome. It is of major clinical importance to identify these patients as early as possible to improve their outcome Therefore, the primary objective of this study was to evaluate predictors of therapeutic success after bariatric surgery based on a retrospective cohort from a university hospital in Germany. Secondary objective was to compare the outcomes of RYGB and SG. We present the following article in accordance with the STROBE reporting checklist (available at https://ales.amegroups.com/article/view/10.21037/ales-21-2/rc).

This retrospective cohort study includes data from all patients who were evaluated for bariatric surgery at a university hospital in Germany (University Hospital Bonn) from May 2008 to December 2014 and underwent bariatric surgery at a certified bariatric surgery centre in Bonn (Johanniter Hospital Bonn). The bariatric program at the university hospital Bonn included preoperative counselling and dietary intervention, and postoperative follow-up visits. The cohort consisted of adults who were considered eligible for bariatric surgery with a BMI >35 kg/m2 and at least one obesity-associated comorbidity or a BMI >40 kg/m2. All patients participated in preoperative dietary and counselling groups for 6 months to 1 year before surgery. Patients were encouraged to participate in regular follow-up visits with a dietician within the bariatric surgery program after surgery. At baseline, we collected information about age, gender, anthropometrics, smoking, alcohol intake, use of metformin and insulin, and comorbidities including type 2 diabetes (T2D), ischemic heart disease, sleep apnoea and arthrosis. We also recorded standard laboratory values. Follow-up data collected 1, 6 and 12 months after surgery included anthropometrics and standard laboratory values. All data was collected retrospectively from electronic patient records. The patients consented to all interventions and the local Ethics Committee of the Medical Faculty of the University of Bonn approved of the study (072/18). The study was conducted in accordance with the Declaration of Helsinki (as revised in 2013).

The statistical analyses were performed with STATA version 15 for windows (STATA Corp, Texas, USA). Due to the distribution of data, participant characteristics are summarised using medians with interquartile-ranges (IQR) or %. We used Chi-square or the Mann-Whitney test for unpaired comparisons and Spearman’s test to evaluate correlation between weight loss (%EWL) and metabolic variables (liver enzymes, lipids and glucose). All patients were included in the analyses.

Logistic regression analysis was used to evaluate predictors of treatment success with results expressed as odds ratios (95% confidence intervals). The analysis was undertaken after ensuring that 5 assumptions were met including an assessment of collinearity. Due to the relatively small sample size, the multivariable model only included five predictors selected based on their clinical relevance (age, baseline BMI, gender, T2D and type of surgery). P values <0.05 were considered statistically significant.

A total of 72 patients (42.4%) were smokers, eight (4.7%) had ischemic heart disease, 43 (25.3%) had sleep apnoea, and 98 (57.7%) had arthrosis. Comparing the two surgical interventions at baseline, patients allocated to RYGB had a lower BMI than those allocated to SG (Table 1). Creatinine was higher in the RYGB compared to the SG group. In addition, 50% of patients in the RYGB group compared to 24% in the SG group had type 2 diabetes (P=0.0075). Accordingly, patients in the SG group had a lower fasting glucose and A1C (P=0.005). We found no other differences between the two groups at baseline (Table 1).

The median time duration between the first consultation and bariatric surgery was 387 days (IQR, 315–509 days) and median weight loss during counselling prior to surgery was 0.45 kg (IQR, −4.0 to 6.1 kg).

No major complications occurred during or after surgery. The number of patients lost to follow up was none, 8 and 42 at 1, 6 and 12 months, respectively. In total, 128 patients (75.3%) were followed until the end of the study. Within 1 year, the median BMI decreased from 49.4 (44.3–54.4) to 34.9 (30.0–40.5) kg/m2 as did the %EWL (Figure 1). Metformin was discontinued in 21 (63.0%) of the 33 patients treated with metformin at baseline. Five of 12 (41.7%) patients discontinued both metformin and insulin treatment. Repeated measures ANOVA showed significant changes in weight as well as standard laboratory values (P<0.001 for all analyses). Weight loss was similar in the groups allocated to RYGB or SG. Moreover, weight loss (%EWL) was not statistically significant different in men and women (P=0.79). Pre-operative weight loss was not associated with later %EWL (rho =−0.109, P=0.25). In total, 86 patients (51.8%) achieved the primary outcome therapeutic success. Comparing the two intervention groups, twenty-six patients allocated to RYGB and 62 allocated to SG achieved therapeutic success (53.1% vs. 51.2%; P=0.830). 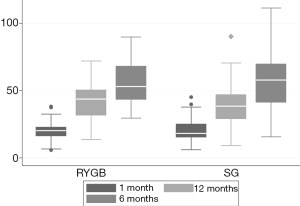 Fourteen men (43.8%) and 72 women (52.2%) achieved therapeutic success. The proportion of patients who achieved treatment success was lower among patients with diabetes compared to patients without diabetes (39.3% and 53.3%, P=0.009).

In our study, we found that baseline BMI and T2D were independent predictors of therapeutic success (>50% EWL) after bariatric surgery. A lower BMI and absence of T2D but not age, gender, surgery method and weight loss prior to surgery predicted therapeutic success. The %EWL in our study was similar to the findings of previous studies (14). The findings provide information to support the debate about criteria for bariatric surgery as patients with a lower BMI have a greater chance of achieving the target weight loss. The association of higher BMI with lower %EWL has been documented both for SG and RYGB (13,15-18). Our findings support the data in the current literature. In our cohort, T2D was independent negative predictor for therapeutic success. Of all patients included in the study, only 39.4% with T2D reached treatment success while 53.3% without T2D reached the outcome (P=0.009). However, metformin and insulin treatment was discontinued in 64% and 41% of patients with T2D, respectively. This indicates major metabolic improvements in these patients, despite lower weight loss. These metabolic changes that occur after bariatric surgery and contribute to improvement in T2D are another very important outcome.

Early weight loss after surgery appears to be of great importance, as a recent multicentre-study with 1,456 patients demonstrated (19). We found considerable early weight loss during the first 6 months after surgery. The beneficial effect on weight loss was similar for SG and RYGB. The proportion of T2D was higher in RYGB, and patients with T2D were less likely to reach treatment success (OR 0.21, 95% CI: 0.07–0.62). The high proportion of T2D might have influenced the performance of RYGB. Patients that underwent SG had a higher baseline BMI. However, the two methods had an equally high proportion of patients who achieved therapeutic success. In the literature, RYGB is shown to perform slightly better than SG in terms of long-term weight loss, nevertheless, both procedures are very beneficial for patients with morbid obesity. Patients in our study underwent SG or RYGB according to shared decision of patient and surgeon. SG was has become increasingly popular during the past decade (20). Both RYGB and SG are recommended in morbid obesity (21,22). Some studies found better metabolic outcomes for RYGB and superior long-term weight reduction (23,24), but adverse events including hypoglycaemia occur more often with RYGB than with SG (25). Based on the beneficial metabolic effects, patients with a high risk of cardiovascular disease could benefit from RYGB rather than SG (26,27). We found no clear difference between the two groups but cannot exclude the possibility that long-term differences may arise. In agreement with previous findings, our data revealed a beneficial effect on post-surgery weight loss and lipids (28). This may reflect different diets (29) , but changes in gut hormone are also likely to be important (30). The changes occur in patients undergoing SG as well as those undergoing RYGB (31).

Our study has also several limitations. The study population was relatively small and may be not representative in all aspects. Furthermore, our dataset is not complete as several patients were lost to follow-up. These limitations are typical for retrospective studies (32).

We found that a high baseline BMI and presence of T2D may have a negative impact on the therapeutic success, defined as >50% EWL. Age, gender, surgery method and weight loss prior to surgery were no predictors for therapeutic success. There was a similar beneficial effect of SG and RYGB on weight loss. This study contributes to the evidence assuming that obese patients fulfilling criteria for bariatric surgery should be considered to undergo surgery at an early time point.

Provenance and Peer Review: This article was commissioned by the Guest Editors (Philipp Lingohr and Jonas Dohmen) for the series “Immunologic Implications of Minimal Invasive Surgery” published in Annals of Laparoscopic and Endoscopic Surgery. The article has undergone external peer review.

Reporting Checklist: The authors have completed the STROBE reporting checklist. Available at https://ales.amegroups.com/article/view/10.21037/ales-21-2/rc

Conflicts of Interest: All authors have completed the ICMJE uniform disclosure form (available at https://ales.amegroups.com/article/view/10.21037/ales-21-2/coif). The series “Immunologic Implications of Minimal Invasive Surgery” was commissioned by the editorial office without any funding or sponsorship. AT reports Staplers of J&J were used in bariatric operations. The company is not mentioned in the manuscript. The authors have no other conflicts of interest to declare.

Ethical Statement: The authors are accountable for all aspects of the work in ensuring that questions related to the accuracy or integrity of any part of the work are appropriately investigated and resolved. The study was conducted in accordance with the Declaration of Helsinki (as revised in 2013). The patients consented to all interventions and the local Ethics Committee of the Medical Faculty of the University of Bonn approved of the study (072/18).