The United States has one of the highest rates of obesity in the world, with more than 30% of the adult population having a BMI greater than 30 kg/m2 (1). Gastroesophageal reflux disease is one of the most common comorbidities of obesity, with rates ranging from 22% to 70% (2). The pathophysiologic contributors to this association are many (3). One such contributor is the higher rate of hiatal hernias (HH), which in patients with obesity can be up to 37% (4). The majority of HH (over 95%) are sliding, or Type 1 HH. Type II-IV paraesophageal hernias (PEH) constitute the remainder (5). Laparoscopic HH repair with fundoplication has proven to be a definitive and safe treatment for PEH and symptomatic HH in the general population (6,7). However, the literature demonstrates that the long-term success rate of this procedure in obese patients with PEH is low (8,9). On the other hand, weight loss surgery, specifically a Roux-en-Y gastric bypass (RYGB) has proven to be effective in improving GERD. This video article advocates for the use of RYGB in obese patients presenting with HH or with history of failed fundoplication. This article reviews the laparoscopic HH repair and concurrent LRYGB technique for both scenarios.

Association of obesity with GERD and hiatal hernia

Patients develop GERD when the anatomic barriers to reflux are disrupted. The lower esophageal sphincter (LES), the angle of His, and gastric sling fibers make up some of the essential structures. The crural pillars play an important role in maintenance of the anti-reflux barriers of the esophagus and proximal stomach. Ayazi et al. showed that an increase in BMI was associated with increases in defective LES function as well as HH (10). In fact, in a retrospective case control study of 1,389 patients who underwent upper endoscopy, patients with BMI greater than 30 kg/m2 were 4 times more likely to have HH (11). Prospectively collected manometric data from 285 patients showed that obese patients were more likely to have increased intragastric pressures and GE junction disruption, which are risk factors for hiatal herniation (12).

Anti-reflux surgery addresses GERD and HH by restoring these anatomic barriers to reflux. In addition to the fundoplication, achieving adequate intra-abdominal esophagus and approximating the crura are key components of the HH repair (Video 1) (13). The laparoscopic Nissen fundoplication has been shown to be safe and effective therapy for the treatment of GERD (14,15). In fact, in a randomized control trial of 78 patients presenting to VA hospitals with GERD refractory to PPI, surgery was more effective than medical management (16). With recurrence rates less than 10% and long-term satisfaction scores as high as 96%, this procedure is universally accepted for the treatment of GERD and HH in non-obese patients. The Linx procedure, another anti-reflux intervention, has also shown promising results. At 5 years follow-up, these patients reported a decrease in daily PPI use from 100% to 15% in one study (14).

Repairing a HH can be done with a suture cruroplasty alone or with mesh reinforcement (Figure 1). There have been 5 RCTs to date, as summarized in a meta-analysis and systematic review by Memon et al., in which the recurrence rates between the two techniques are compared (18). The only trial with long term follow up of 5 years reported the most alarming recurrence rates of 59% and 54% respectively (19). Notably, the mean BMI in this trial was 31 kg/m2. Considering the fact that morbidly obese patients have a known increased rate of abdominal wall hernia recurrence, the HH recurrence rates reported in the aforementioned RCTs likely underestimate the true recurrence rate in the obese population (20).

Due to these concerns with traditional anti-reflux surgery in the obese population, bariatric surgeons often perform a concomitant weight loss procedure when addressing a HH in an obese patient. Bariatric surgery has two theoretical mechanisms of improving the success of a HH repair. First, bariatric surgery alone has been shown to improve GERD symptoms and decrease antacid use, with some studies suggesting better efficacy than medical therapy alone (15,21-23). Secondly, the weight loss that is induced ameliorates intraabdominal pressure, which is a significant risk for hernia repair failure. Surgeons have previously avoided repairing HH during RYGB due to concerns over increased morbidity and the belief that RYGB would resolve GERD without having to repair the HH (24). However, Kothari et al. established that HH during RYGB does not increase 30-day morbidity or mortality compared to patients who only undergo RYGB (25). Chaudhry et al. argued that concurrent HH repair with RYGB is not only safe, but also effective. At median follow up of 3 years, patients who underwent concomitant RYGB with HH repair had reductions in Gastroesophageal Reflux Disease Health-Related Quality of Life (GERD-HRQL) scores and decrease in antisecretory medications (26). Although there are no prospective controlled trials directly comparing cruroplasty vs. no cruroplasty for HH during RYGB, Borbély et al. reported objective findings in a series of 47 patients with persistent GERD symptoms following RYGB. They showed that 53% of these patients had a HH and 58% had a hypotensive LES (27). It should also be noted that failing to repair the hiatal hernia during RYGB has its own risks. Albeit rare, there are cases of patients presenting with obstructed roux limbs due to herniation. Moreover, repairing a HH containing an incarcerated gastric pouch is theoretically more dangerous than repairing the HH at the initial RYGB (28). Based on this data there, HH’s encountered during a RYGB should be definitively addressed.

In addition to the review by Kothari et al., database analyses of both the National Surgical Quality Improvement Program (NSQIP) and the Metabolic and Bariatric Surgery Accreditation and Quality Improvement Program have reported on the safety of concurrent bariatric surgery with hiatal hernia repair. Both studies demonstrated similar 30-day morbidity and mortality rates between concurrent HH repair with bariatric surgery compared to bariatric surgery alone (29,30). In a subgroup analysis, the NSQIP study found that LSG in conjunction with HH repair had lower morbidity than RYGB with HH repair and the authors concluded that LSG should therefore be preferred when considering weight loss surgery during hiatal hernia repair. However, as articulated in the MBSAQIP retrospective review of over 80,000 patients, the increase in morbidity is likely due to the inherent higher morbidity of performing a RYGB compared to LSG (29,30).

More importantly, there is data to suggest LSG has the potential to worsen GERD, or even cause de novo GERD (31,32). LSG has become the most common bariatric procedure, accounting for about 70% of all weight loss procedures performed today (33). Yet at the 4th international consensus, GERD was the most commonly reported complication after LSG (33). In a systematic review of GERD rates after LSG, no agreement was achieved (34). More recently, an additional systematic review published in 2016 showed there was a trend in increased GERD prevalence after LSG, but again no definitive conclusions were reached (35). The difficulty in reaching conclusions among these publications are their variability in definitions of GERD, follow up times, and objective vs. subjective diagnostic measures of GERD. Despite this lack of agreement, some of the larger reviews remain troubling. For example, the rate of de novo GERD after LSG was found to be 8.6% and 9.3% in two respective reviews (31,36). Perhaps more concerning, there is an alarming increase in the incidence of Barrett’s in this population (37-39). Despite these data, albeit variable, only 23.3% of bariatric surgeons at the fifth international consensus conference on sleeve gastrectomy believed GERD is a contraindication to LSG (40). There are several factors that may contribute to the mechanism of increasing GERD after LSG (41). For example, the angle of His and gastric sling fibers are disrupted, and basal LES pressures are decreased (41). Also, in the setting of a hiatal hernia repair, the sleeve is not anchored into the abdomen the way a gastrojejunostomy anchors the gastric pouch in a RYGB. Because the diameter of the sleeve is essentially the same as the hiatal opening this can allow for easier re-herniation of the stomach.

With regard to RYGB, the literature supporting its utility in managing obese patients with GERD is more consistent. For example, Frezza et al. showed a decrease in reported heartburn symptoms from 87% to 22% as well as a decrease in antacid usage in a cohort of 152 obese patients (21). In a systematic review of bariatric surgery and GERD, RYGB was found to have a significant decrease in GERD compared to other bariatric procedures (42). Consistent with this finding, The Society of American Gastrointestinal and Endoscopic Surgeons (SAGES) Foregut Task Force has determined that RYGB is the preferred surgical treatment for GERD in obese patients (43). 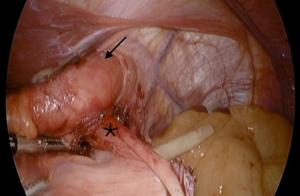 Figure 2 Herniated Nissen fundoplication. Esophagus (arrow) will be mobilized into the abdomen. The herniated wrap (star) has not yet been reduced to native anatomic position for completion of the bariatric procedure.

When performing RYGB for a failed fundoplication, the procedure begins with the same key components that would be performed during a redo fundoplication. For example, restoring normal anatomy by returning the GE junction 3 cm back into the abdomen, as well as taking down the fundoplication and returning the fundus to its normal position (Video 2) (44). Once normal anatomy is established and cruroplasty is accomplished, the surgeon proceeds by creating the gastric pouch. When operating on a patient with history of a prior fundoplication, the fundus may need to be resected from the remnant stomach as its blood supply is often compromised (Video 3).

GERD and HH present a challenge in surgical management of the patient with obesity. Although fundoplication has high success rates in the nonobese population, the rate of failure in obese patients warrants a reconsideration in using this procedure for all patients. RYGB has proved to be successful at treating GERD and should be considered the procedure of choice in the appropriate obese patient with a hiatal hernia. LSG is very popular among bariatric surgeons at present, but should be avoided in obese patients presenting with a hiatal hernia or history of GERD. RYGB is safe when performed concurrently with HH repair and effective when treating a failed fundoplication. As the rate of LSG has surpassed RYGB worldwide, we should not forget the utility of the RYGB when treating obese patients with GERD and HH.

Conflicts of Interest: All authors have completed the ICMJE uniform disclosure form (available at http://dx.doi.org/10.21037/ales-20-75). The authors have no conflicts of interest to declare.