Biliopancreatic diversion (BPD) was introduced by Scapinaro et al. and consisted of a distal gastrectomy with a long roux-n-Y reconstruction. In this operation entero-enterostomy is placed at 50 cm from the iliocecal valve (1). Scapinaro’s procedure was modified by Hess into the BPD-duodenal switch (DS) (2). Hess proposed a vertical sleeve gastrectomy (SG) and also modified the length of the common channel to 100 cm (2). This procedure considered as one of the best and effective procedure for the treatment of obesity and metabolic disorders (3). As the procedure itself is very complex and difficult, for worldwide use with minimally invasive techniques, it was simplified. Sánchez-Pernaute et al. described single anastomosis duodeno-ileal bypass with sleeve gastrectomy (SADI-S) in 2007 (4). In their technique, preservation of pylorus eliminates the bile reflux therefore bile diversion is unnecessary. Since then they modified the technique and many other modifications have been developed including Cottam, Huang, Lee and Ozmen (5-8) (Figures 1,2). 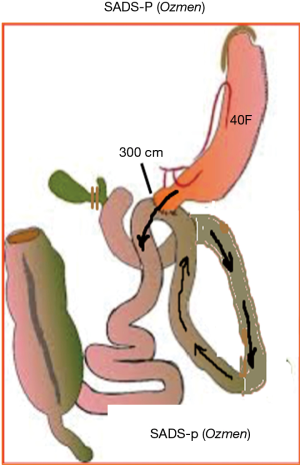 I introduced the technique of single anastomosis duodenal switch (SADS) and performed over hundred procedures with success on weight-loss and metabolic control (8,9). The present paper explains the steps of the procedure for both laparoscopic and robotic approaches.

I will explain the technique for both laparoscopic and robotic approach in ten steps.

SADS is the modification of standard BPD/DS and there are many modifications of SADS also (10). Metabolic and weight-loss outcomes of SADI/SIPS techniques are known (4,5,10,11). However, the certain amount of the patients suffer from malnutrition and GI symptoms such as diarrhea after SADI or SIPS (10,11). There is a clear need of alternative procedures with fewer side-effects.

We first introduced our approach as an alternative to SADI/SIPS in 2014 and presented first 13 laparoscopic cases during ELSA congress in 2015 and then again in ELSA congress in 2017, I gave a talk on robotic SADS: proximal approach (8). Since we performed the first case, we have used this technique either laparoscopic or robotic in more than hundred cases with morbid obesity and diabetes and results were partly presented elsewhere (9). Results shown in Table 1 includes total of 1,349 patients with 2 years follow-up. Patients with the median [range] age of 37 [22–69] years with BMI of 49 [41–73] kg/m2 underwent DS. Eighty-two patients had type 2 diabetes with a median [range] of 45 [3–100] months with 8.6% (4.9–9.9%) of HbA1C levels. After surgery HbA1C levels decreased to 5.1% (4.8–5.6%) in 12 months (remission rate of 100%). The procedure seems to be effective for both weight-loss and metabolic control for type 2 diabetes especially in patients with high BMI. In our practice we found that robotic approach is better in those patients as it creates better view, better maneuver ability and give chance to surgeon in order to do the difficult jobs in a narrow space.

Patient characteristics and effect of different procedures on diabetes

We also studied the fecal elastase levels in order to check exocrine pancreatic function after surgery (12). We compared levels after SG, mini-gastric bypass/one anastomosis gastric bypass (MGB/OAGB) and SADS. We concluded that almost every patients after gastric bypass or DS are suffering from pancreatic exocrine insufficiency, whereas only 7–14% are having symptoms of malnutrition (4,10). Although there are many modifications, except for one study with 5 years follow-up, follow up data remains limited to 1 year which means more patients might suffer from malnutrition, weight gain and metabolic failure.

Therefore in patients with the symptoms, pancreatic enzyme replacement therapy might be the solution (12).

Provenance and Peer Review: This article was commissioned by the Guest Editor (Mehmet Mahir Ozmen) for the series “Bariatric and Metabolic Surgery” published in Annals of Laparoscopic and Endoscopic Surgery. The article has undergone external peer review.

Conflicts of Interest: The author has completed the ICMJE uniform disclosure form (available at http://dx.doi.org/10.21037/ales-2019-bms-07). The series “Bariatric and Metabolic Surgery” was commissioned by the editorial office without any funding or sponsorship. MMO served as the unpaid Guest Editor of the series and serves as an unpaid editorial board member of Annals of Laparoscopic and Endoscopic Surgery from Mar 2019 to Feb 2021.

Ethical Statement: The author is accountable for all aspects of the work in ensuring that questions related to the accuracy or integrity of any part of the work are appropriately investigated and resolved. All procedures performed in studies involving human participants were in accordance with the ethical standards of the institutional and/or national research committee(s) and with the Helsinki Declaration (as revised in 2013). Written informed consent was obtained from the patient.