After the hiatal hernia repair: fundoplication, yes or no? Partial or complete?

We believe the answers to these questions will be based on each individual patient’s presentation and knowledge of their physiology. The following sections will address these decision points.

Do all patients require a fundoplication after hiatal hernia repair?

However, larger hiatal hernias and, especially, paraesophageal hernias (PEH) were considered to be a different entity and presenting a higher risk to patients. This was based on a publication by Skinner and Belsy in 1967 (7) describing PEH as having a high risk of incarceration, volvulus and strangulation, with a nearly 30% mortality rate. Therefore, the recommendation for decades was that PEH’s needed to be repaired when discovered, irrespective of their association with symptomatic GERD. Of course if one were repairing the hiatal hernia to prevent catastrophic gastric necrosis, reflux is not a concern. However, outcomes with this approached mimicked Allison’s with a significant number of patients developing GERD symptoms postoperatively and subsequent recommendations were to routinely add a fundoplication to PEH repair (8,9).

Nevertheless, it must be acknowledged that although fundoplication are desirable, the clinical condition of the patient may make them impractical. For example, the patient who presents with gastric necrosis requiring gastrectomy completely eliminates even the possibility of a fundoplication. The hemodynamically unstable patient who requires an expedited repair is clearly inappropriate for prolonging anesthesia time to add a fundoplication. The figure presents our decision flow chart in the overall management of hiatal hernia (Figure 1). On the other hand, it should be emphasized that in over 30 years of our combined surgical experience, we have encountered such circumstances only a handful of times. Therefore, in general, fundoplication should be used following all hiatal hernia repair. 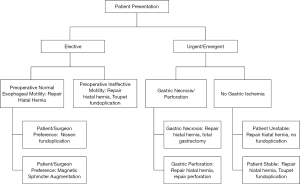 Figure 1 Flow diagram of keys decision points in hiatal hernia repair and use and choice of fundoplication.

If a fundoplication is done, should it be partial or complete?

Although antireflux operations are widely performed with the same basic surgical principles as previously described, there are surgeon-specific differences in technique that may account for symptoms of dysphagia and gas bloat after fundoplication. When the fundoplication is described as “floppy”, there is significant imprecision and subjective surgical judgement that allows for wide variability in the actual fundoplication. Variable use and size of a bougie is another factor that can create variations in the quality of the fundoplication and resulting in variations of post-operative symptoms. Division of the short gastric vessels to allow for better mobilization of the fundus is another factor that creates large variations in practices and outcomes. Kinsey-Trotman et al. (13) found less gas bloating and a better preservation of the ability to vent the stomach in patients when the short gastric vessels were left intact.

With the advent of the magnetic sphincter augmentation (MSA) device, there now exists a choice between a fundoplication and MSA. In the elective setting in patients meeting physiological criteria for MSA, placement of the LinxTM instead of a fundoplication may be appropriate (15). Our purpose here is not to adjudicate the superiority of one approach over the other, but merely to acknowledge that both are viable options depending on the surgeon’s and patient’s preference in the elective setting.

MSA with the Linx™ device has become a widely-used alternative to fundoplication for GERD patients. There have been several studies that compare MSA to laparoscopic Nissen fundoplication. Skubleny et al. (16) performed a systematic review and meta-analysis and concluded that MSA is a good alternative with similar results in controlling reflux symptoms. It is also a less technically demanding procedure to perform with limited esophageal dissection and preservation of the short gastric vessels. Another perceived advantage is standardization of the MSA placement technique, whereby success rate with the fundoplication are correlated with surgeon expertise and experience performing these procedures.

There are patient factors that limit the use of MSA. It is currently not indicated in patients with esophageal dysmotility and severe erosive esophageal disease where fundoplication remains the standard of care. Additionally, some studies report increased early dysphagia with Linx™ as compared to Nissen fundoplication (16). Thus, dysphagia may require additional esophageal dilations to “stretch” the capsule that encases the device. Some studies report better results with bloating and ability to emesis compared to Nissen fundoplication (16). Although rare, there have been reports of the Linx™ device erosions into the esophagus. These erosions have generally occurred in the smaller devices (e.g., the 12 bead device), which is no longer on the market. Lastly, patients with some metal allergies, such as nickel and titanium, are not candidates for LinxTM as these metals are in the casings of the magnets.

Under normal circumstances, most patients after hiatal hernia repair should have a fundoplication. The exceptions being the emergent cases associated the gastric necrosis or the patient in extremis. In patients with good motility, a complete fundoplication is preferable and MSA a viable alternative. Patients with preoperative symptoms of dysphagia and poor motility, should undergo a partial fundoplication, accepting the higher GERD recurrence rates.

Conflicts of Interest: All authors have completed the ICMJE uniform disclosure form (available at http://dx.doi.org/10.21037/ales.2020.03.11). The authors have no conflicts of interest to declare.