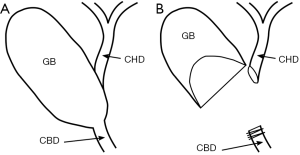 Figure 1 Shows how an obliterated hepatocystic triangle can cause confusion, with the common bile duct appearing to be the cystic duct (A). Figure (B) depicts the typical injury associated with this error trap. GB, gallbladder; CHD, common hepatic duct; CBD, common bile duct.

Aberrant right or right posterior hepatic ducts (RPHD) can also lead to error traps that are particularly prone to injury during an infundibular-first approach. In particular, RPHD that drain into the cystic duct, gallbladder neck, or common hepatic duct are problematic (Figure 2). These anatomic variants can occur in up to 3% of patients (10,11). They can be difficult to identify and injury may be unavoidable with the infundibular-first approach. In addition, the failure to identify an aberrant right hepatic duct on cholangiogram is an error trap. In some cases the absence of aberrant anatomy can be difficult for both surgeons and radiologist to identify. Failure to identify an injury on cholangiogram results in a delay in recognition and negatively effects patient outcomes (12).

There are four main identification techniques that can be used to help identify structures:

IOC can be a useful tool to identify anatomy as well as early recognition of an injury. However, there is still no clear answer as to whether routine IOC is beneficial or cost effective (4). Part of this debate stems from the fact that IOC is dependent on appropriate technique and interpretation.

Fluorescent intraoperative cholangiography has been available since 2009 and has benefits when compared to IOC. Fluorescence has a lower setup time and eliminates radiation exposure to both the patient and staff (17). In addition, fluorescence does not require the placement of a cholangiocatheter and thus can avoid a catheter related bile duct injury (18). Although, studies have demonstrated that fluorescent imaging is safe and has promise, studies have not been large enough to show reduction in biliary injury (5).

Intraoperative ultrasound is another tool available for both open and laparoscopic cases. Ultrasound can aid in defining anatomy (19,20), identifying common bile duct stones (21,22), and locating the proximity of the middle hepatic vein to the gallbladder (a common cause for massive bleeding during cholecystectomy) (23-25). An intraoperative ultrasound showing a close association of the middle hepatic vein and gallbladder fossa is shown in Figure 3. However, the use of ultrasound can be difficult and has a learning curve to be used effectively (26,27). 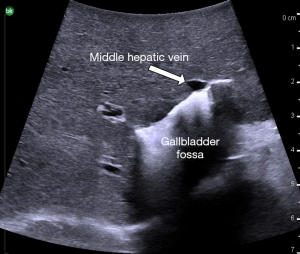 There are two main operative techniques when approaching a cholecystectomy and a third novel technique that will be described in more detail: 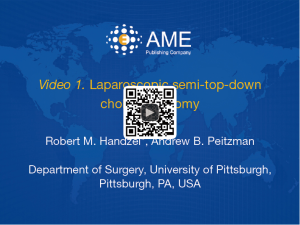 The patient should be positioned supine with arms out and a foot-board in place if steep reverse Trendelenburg is anticipated. After the patient is prepped and timeout is performed, four trochars are placed depending on surgeon preference for entry and position. A high resolution 30° or 45° scope should be used to aid in visualization. It is important to identify anatomic landmarks prior to starting dissection. This includes Rouviere’s sulcus (where the right posterior portal pedicle is located), the common bile duct, and the gallbladder infundibulum.

The semi-top-down technique to a laparoscopic cholecystectomy has the visual advantages of an infundibular-first approach and the safety advantages of a top-down approach. Thus, it utilizes the advantages while eliminating the disadvantages of both techniques.

Conflicts of Interest: Both authors have completed the ICMJE uniform disclosure form (available at http://dx.doi.org/10.21037/ales.2019.06.01). The authors have no conflicts of interest to declare.

Ethical Statement: The authors are accountable for all aspects of the work in ensuring that questions related to the accuracy or integrity of any part of the work are appropriately investigated and resolved. All procedures performed in studies involving human participants were in accordance with the ethical standards of the institutional and/or national research committee(s) and with the Helsinki Declaration (as revised in 2013). Written informed consent was obtained from the patient for publication of this manuscript and any accompanying images.