Heald and Ryall introduced surgical techniques consisting of the complete removal of the mesorectum, which was named total mesorectal excision (TME) in the 1980s (1,2). Being the rectal cancer gold standard TME has provided a low recurrence rate (3). The main outcome that could be achieved in the surgical treatment of rectal cancer is obtaining a good quality mesorectal excision besides enough harvested lymph nodes. (4). In our series of laparoscopic and robotic TME mean harvested lymph nodes was 27; without any significant difference between the two groups.

The use of minimally invasive surgery in rectal cancer had been controversial (5). Esen et al. reported that robotic and laparoscopic surgery for the treatment of rectal cancer could be utilized safely. Both techniques provide good specimen quality and are associated with adequate morbidity both in the operative and postoperative period. No difference in the number of harvested lymph nodes was seen between robotic and laparoscopic surgery for rectal cancer (4). All procedures performed in studies involving human participants were in accordance with the ethical standards of the institutional and/or national research committee(s) and with the Helsinki Declaration (as revised in 2013). Written informed consent was obtained from the patient.

Before surgery, the diverting ileostomy sides are routinely marked with permanent markers by the stoma-therapy nurse. Generally, the total number of four possible sites are marked. We routinely perform a diverting ileostomy in patients who have undergone neoadjuvant radiotherapy and/or when the tumor is located in the mid-distal rectum. Mechanical bowel preparation is administered the day before the operation to all of the patients except in patients with an obstructing lesion. Low molecular weight heparin for venous thromboembolism prophylaxis is started 12 hours before the surgery. In the operating room, a central venous catheter and thoracic epidural catheters are inserted by the anesthesiologist. Under general anesthesia and epidural analgesia, Allen stirrups are utilized and a modified lithotomy position is established. A urinary catheter is inserted through the urethra for the emptying of the urinary bladder. During the surgery and in the postoperative period urinary output is monitored with this catheter. The patient’s legs are placed in Allen stirrups, slightly bent and abducted.

To prevent patient slipping during surgery, supports are used bilaterally to the upper arm on the lateral sides ad shoulders; since the patient position is variable through the various steps of the surgical procedure (reverse and steep Trendelenburg with right and left tilting). The patient is prepped starting from the perineum. After the preparation of the perineum abdominal preparation starts from the xiphoid process until the pubic symphysis from superior to inferior; between the posterior axillary lines laterally.

The similar procedures of laparoscopic and robotic techniques are provided in the common text while the differences are specifically highlighted.

The surgeon and assistance (camera) stay on the patient’s right side. We routinely induce pneumoperitoneum with a Veress needle which is placed about 2 cm superior to the umbilicus on the midline in patients who did not have a previous abdominal surgery. The Veress needle is placed in the left upper quadrant in patients who had undergone an abdominal procedure previously. The insufflation pressure is set to 12 mmHg. A 10 mm (camera) trocar is trusted from the Veress needle site. A telescope is placed through this trocar into the abdomen. Two 5 mm trocars are placed bilaterally 6–7 cm from the umbilicus. The one on the left will be used by the assistant and the one on the right will be used by the left hand of the surgeon. For the right hand of the surgeon, a 12 mm trocar is placed in the right iliac fossa.

The supposed placement of the trocars allows for the proper and ergonomic dissection of the left colon, splenic flexure in addition to an optimal dissection of the pelvis to achieve mesorectal excision. After the placement of the trocar, the patient is put in steep Trendelenburg position and tilted to the right side. Thus, the small bowel moves to the right upper quadrant providing optimal exposure.

A line is drawn from the subcostal margin (at the level of the 8th rib junction) to the approximate location of the right femoral head “costofemoral line” (red line in Figure 1). A-line 4 cm parallel to the costofemoral line towards the hepatic flexure “offset line” (green line Figure 1) is drawn. Initial endoscope port will be put at the crossing between the green line with the midline, thus a Veress needle is thrust into the abdominal cavity 2–3 cm superior to the umbilicus along the midline. After carbon dioxide insufflation at 12 mmHg, a trocar with a diameter of 12 mm is thrust and the exploration is performed using the telescope of the Da Vinci Xi system. 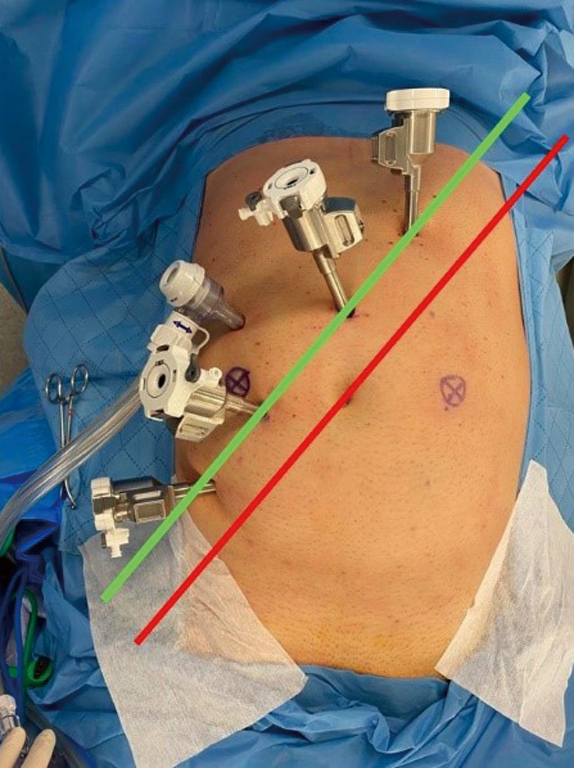 “Port 1” (8 mm robotic port) is put superior to the endoscope port on the green line. Ports 3 and 4 are placed on the dashed line inferior to the endoscope port. Airseal trocar (another 8 mm special trocar) is put for the assistant, on the lateral side and it is triangulated between 3rd and 4th ports. On the system “LOWER ABDOMINAL” is selected for anatomy, “PATIENT LEFT” is selected for the approach. The operating table is prepared at 10 degrees Trendelenburg, rolled to the right side at 10 degrees, and the height is adjusted to the maximum lowest level.

The patient cart is deployed for docking (DEPLOY). The patient cart is driven so that the green laser is positioned on the initial endoscope port. Adequate clearance must be ensured between the patient and the da Vinci arms. Then Arm 2 is docked with the endoscope port. “FLEX” is adjusted between “L” and “E”. The scope is pointed to the sigmoid colon and “TARGETING” is performed. The other arms are docked.

Vascular dissection, mobilization of the sigmoid and the left colon

Exploration of the abdominal cavity is the primary step of the operation. In our clinic, we prefer medial to lateral dissection. Visualization of the inferior mesenteric artery (IMA) is the first step in sigmoid colon dissection. At the promontorium level, the peritoneum is cut open on the right side. The dissection continues from this level until the pedicle of the IMA. The dissection continues below the mesentery of the descending colon. To save the left ureter and hypogastric nerve plexus, the surgeon should adhere to the right dissectişon plane. The IMA must be dissected close to its aortic root to achieve high ligation for better oncological results. The surgeon should be careful to preserve the superior hypogastric nerve plexus while the IMA is dissected. During this dissection, the surgeon should adhere to sticking in the right plane in front of the Gerota fascia also called the embryogenic plane to prevent injury to the left ureter. Although it is not always obligatory to see the ureter. After the IMA dissected, clips are placed and it is incised close to its aortic root (high ligation). Instead of clipping, it could also be ligated with energy devices.

The dissection (medial to lateral) continues superiorly. The inferior mesenteric vein is dissected on its course and either clipped or ligated near the inferior border of the pancreas.

The lateral to medial dissection initiates, with the medial retraction of the left colon. The attachments on the lateral sides of the sigmoid and the left colon are incised for the complete mobilization of the colon. Then lateral to medial dissection continues superiorly. An inferior approach is utilized to incise the transverse mesocolon from the inferior border of the pancreas. The complete mobilization of the splenic flexure is performed by the division of the gastrocolic ligament and the lateral attachment to the peritoneum. We usually mobilize splenic flexure for rectal cancer surgery.

In our clinic, we use single docking for the mobilization of the splenic flexure when performing robotic surgery. In laparoscopic surgery, we use a second monitor, the trocar for the telescope is unchanged although the surgeon uses the assistant left trocar.

Following complete mobilization of the splenic flexure, the retroperitoneal structures become apparent. Renal vein left kidney, aorta and gonadal vessels can be seen. Mobilization of the rectum is the latter step.

Seminal vesicles and vagina are the potentially damaged structures during the anterior dissection. The insertion of a vaginal probe or digital vaginal examination by the assistant could help the surgeon. If an injury is detected it allows for prompt repair.

On the sides, shifting planes could end up injuring the ureters. On the anterior aspect; in the female patient, the uterus could sometimes block the way of proper dissection. It could be retracted by a probe or could be stitched up the anterior abdominal wall for retraction.

An area for proximal transection on the descending colon is determined. The mesentery of the colon is ligated and incised with energy devices until the colon is reached. Intravenous indocyanine green (ICG) is used for fluorescence angiography. Following the injections, vascular structures become enhancing visible aiding us to confirm an area with good vascular perfusion for the selection of the transection point. A clip is placed on this point to determine this area when the colon is taken out from the Pfannenstiel incision.

A 4–5 cm vertical suprapubic incision (Pfannenstiel) is preferred in our clinic. A small plastic wound protector is placed. The colon is taken out through the wound protector, the specimen is divided from the left colon and it is brought for the frozen examination of the distal surgical margin. The anvil of the circular stapler (28 or 31 mm) is introduced to the proximal end of the colon and a 2-0 polypropylene is used to achieve a purse string. The colon placed back in the abdominal cavity. The wound protector is closed and insufflation is initiated for pneumoperitoneum.

An intestinal loop is chosen for diverting ileostomy about 40 cm proximal to the caecum and marked with stapler for determining the afferent and efferent loops. It is taken out from the preoperatively marked stoma site.

After ending the pneumoperitoneum, the Pfannenstiel incision is closed with loop PDS. The fascial defects in the port sites larger than 8 mm are repaired with 2/0 vicryl sutures. The incisions are sutured primarily. The intestinal loop is matured to loop ileostomy.

Conflicts of Interest: All authors have completed the ICMJE uniform disclosure form (available at http://dx.doi.org/10.21037ales-20-39). The authors have no conflicts of interest to declare.

Ethical Statement: The authors are accountable for all aspects of the work in ensuring that questions related to the accuracy or integrity of any part of the work are appropriately investigated and resolved. All procedures performed in studies involving human participants were in accordance with the ethical standards of the institutional and/or national research committee(s) and with the Helsinki Declaration (as revised in 2013). Written informed consent was obtained from the patient.