Laparoscopic surgery represents gold standard in the treatment of colorectal cancer (1,2). On a clinical point of view, right colon cancer is characterized by lower incidence (3) and laparoscopic right hemicolectomy is less used among the various techniques of laparoscopic colic resection, due to intrinsic difficulties of performing an intracorporeal anastomosis (4,5), as to complex variation of right colon vascular anatomy observed in the population (6).

The aim of this study is to propose a standardization of the procedure, suggesting a critical view of safety for laparoscopic right hemicolectomy as Strasberg did for cholecystectomy procedure (7), helping to identify the surgical plans and structures involved, decreasing the risk of intraoperative complications and conversions (8), and counseling some hints which could benefit its performance.

A Veress needle is inserted through a 2-mm incision 3 cm below the left costal margin on the emiclavear line (Palmer’s point) to create pneumoperitoneum.

Ports are placed in this setting:

❖ T1: 10-mm port in the left flank, at the intersection of transverse umbilical line with longitudinal emiclavear line.

❖ T3: 5-mm port in the sovrapubic region, along the midline, on the Pfannenstiel incision line.

❖ T4: 5-mm port in the right flank, at the intersection of transverse umbilical line with longitudinal emiclavear line (Figure 1). 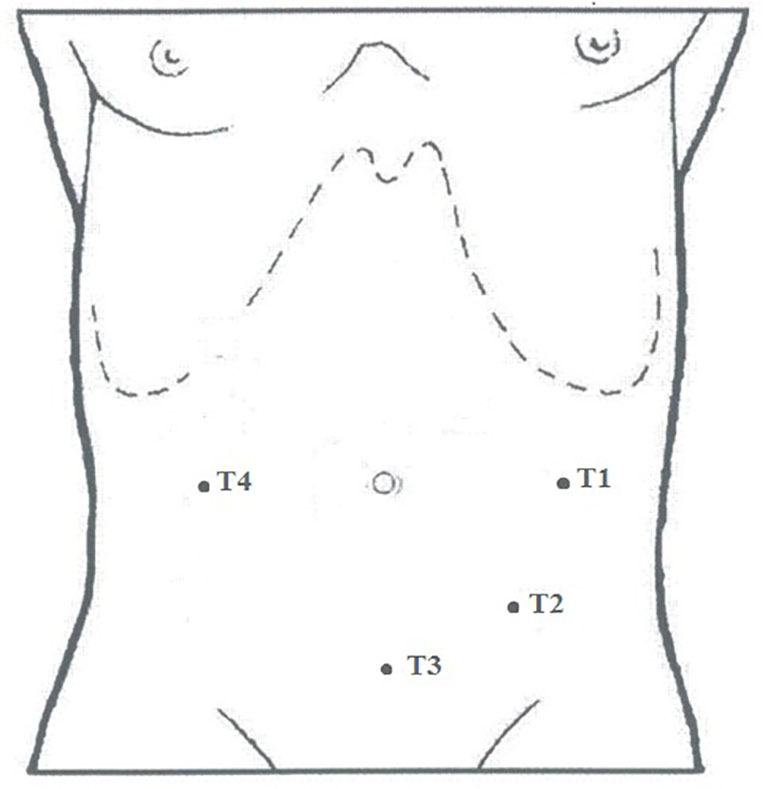 A meticulous exploration of the peritoneal cavity is needed. An eventual adhesiolysis must be performed in order to mobilize colon and small intestine. The next step is to locate the lesion and evaluate the possible extension to nearby organs or peritoneal carcinomatosis.

The patient is placed in anti-Trendelenburg position and tilted 30 degrees to the left.

With atraumatic forceps inserted through T1 and T3, the operator moves the omentum cranially to expose ascending colon; small bowel loops are shifted to the left to permit a clear field and a constant exposure.

Once the last ileal loop has been identified, the operator grasps cecum, with an atraumatic clamp inserted through T3, pulling it towards the right paracolic gutter and exposing the ileocolic vascular axis. The operator begins to separate the plane of ileocolic vessels from the loose and avascular adhesions that hold it attached to retroperitoneum. In fact, during embryological development, mesocolon undergoes a rotation that causes the ascending colon with cecum to lie down on the retroperitoneum, covered by Gerota’s fascia and primitive parietal peritoneum; the fusion between the right side of primitive mesocolon and primitive parietal peritoneum is called Toldt’s fascia. Therefore, the operator gently provides for the gradual separation of this fascia from retroperitoneum (“just like opening a plastic grocery bag”): at the end Toldt’s fascia will be located anteriorly with right colonic vessels, while Gerota’s fascia, right ureter and right gonadal vessels are left posteriorly in their anatomic site.

The identification of the correct plane is guaranteed by the avascularity of the dissection. If you meet any bleeding, you may get lost.

Dissection begins with incision of the peritoneum at the level of inferolateral margin of ileocolic vessels; once the correct plane has been identified, the operator, with his left hand (T3), releases cecum and grasps the ileocolic vascular axis, pulling it up and keeping it suspended, while, with his right hand (T1), proceededs to separate the plans by a blunt dissection or using an ultrasonic scalpel.

Tricks: in this phase the assistant, with his left hand, holds caecum pulled toward the paracolic gutter with a clamp inserted through T4, keeping the clear exposition of vascular plane and making ileocolic axis straight (Figure 2) 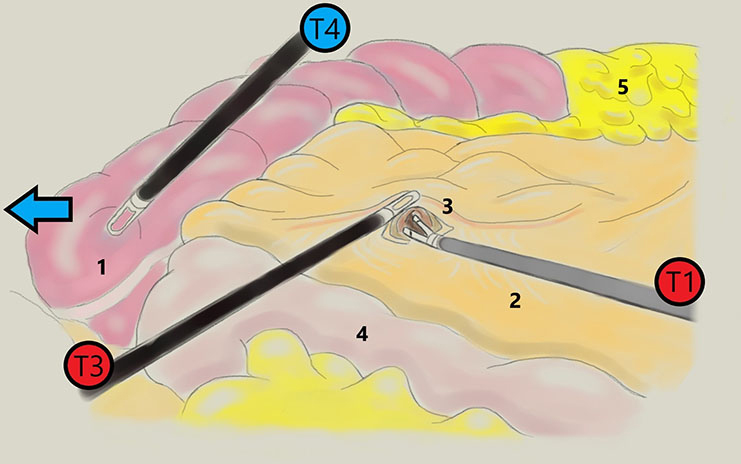 As the dissection progresses, all the retroperitoneal structures, including gonadal vessels and ureter, are left posteriorly, and mesocolon is progressively lifted up anteriorly. Proceeding cranially, the operator opens the peritoneum that cover the superior mesenteric vein axis in the direction of the medium colonic vessels peduncle.

Tricks: the assistant, with the clamp inserted through T4, releases caecum and grabs transverse colon and pulls it upwards, making ascending colon straight, helping the operator in the cranial dissection (Figure 3) 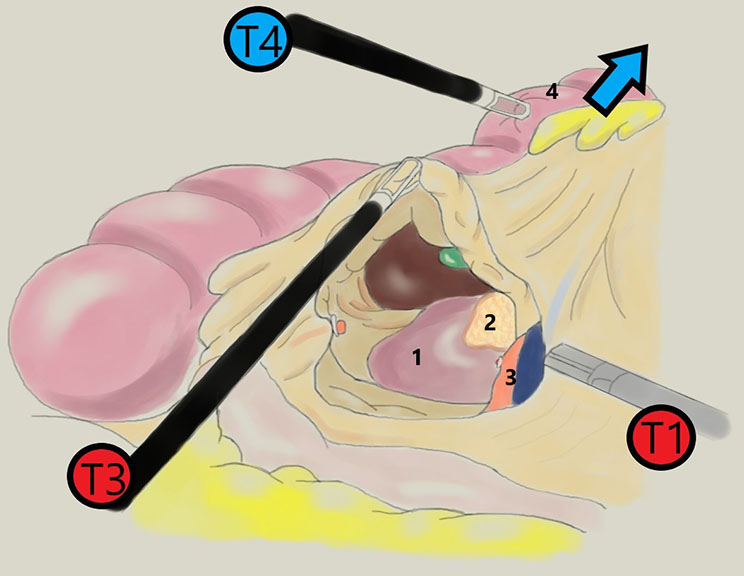 The operator separates the adipose-lymphatic component from vessels, pushing it onto the colonic side, obtaining a radical removal of lymphatic pathways of neoplastic diffusion.

With ileocolic vessels kept in tension, mesocolon dissection continues identifying the descending part of duodenum and the uncinate process of the head of pancreas. It’s important to be careful not to confuse mesocolon with pancreatic tissue: this difficulty is greater in sclerotic tissues, especially in elderly patients or in subjects with very thick mesentery. During dissection, duodenum and pancreas are left on the posterior plane. Ileocolic artery and vein are clipped and sectioned. Subsequently right colonic vessels are identified, when present, above the uncinate process of pancreas, then they are clipped and sectioned.

A coloepiploic detachment is performed from left to right dissecting the avascular plane between great omentum and transverse colon, in order to mobilize colon as much as possible: the assistant (T4) pulls the omentum down, while the operator with his left hand uplifts transverse colon pulling it gently towards him. Proceeding laterally, the uncinate process and the gallbladder (when present) are identified on the posterior plane; the operator completes the section of residual adhesions of the hepatic flexure.

In the completion phase of coloparietal detachment, the operator with his left hand progressively pulls ascending colon and cecum to the left, up to the last ileal loop; this maneuver is bloodless thanks to the previous separation of the posterior plane during vascular dissection. It’s interesting that during the intervention there is no rotation of intestine and the entire demolition phase occurs in an anti-clockwise direction, with the vascular dissection upward and coloparietal detachment downward.

At the end of detachment, the mesentery of last ileal loop is interrupted and the intracorporeal ileal section is performed with laparoscopic linear stapler.

Once transverse colon section is made, an intracorporeal anastomosis is performed by firing one 60-mm linear stapler (T1) load in an isoperistaltic side-to-side fashion.

Tricks: the stapler is inserted through the enterotomies, but it is not pushed into the intestinal stumps: the operator makes the stumps slide along the branches of the stapler “like wearing socks on the feet”

To facilitate this maneuver, stay suture is placed on ileal and colonic stumps, to pull them upwards and make them straight by assistant (Figure 4). 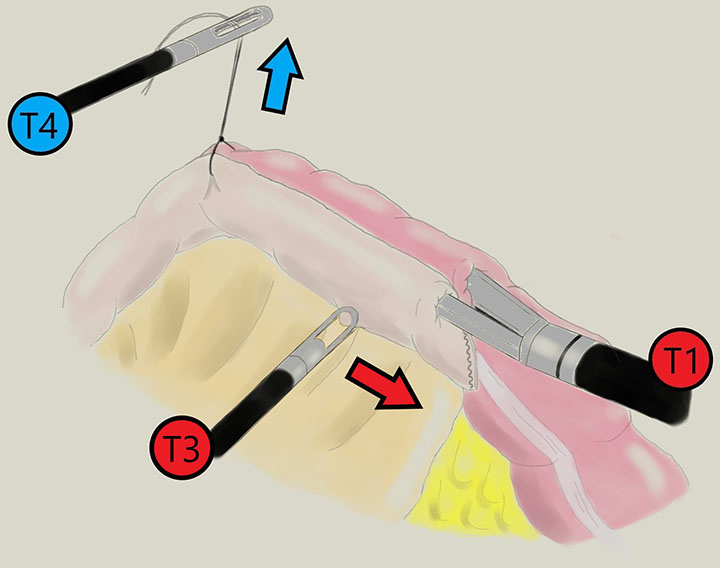 The specimen is extracted through a Pfannestiel minilaparotomy about 5 cm, using a wound protector/retractor.

Conflicts of Interest: All authors have completed the ICMJE uniform disclosure form (available at http://dx.doi.org/10.21037/ales-20-93). The series “Right Colectomy 2.0” was commissioned by the editorial office without any funding or sponsorship. Dr. M Milone served as the unpaid Guest Editor of the series and serves as an unpaid editorial board member of Annals of Laparoscopic and Endoscopic Surgery from Aug 2016 to May 2021. The other authors have no other conflicts of interest to declare.

Ethical Statement: The authors are accountable for all aspects of the work in ensuring that questions related to the accuracy or integrity of any part of the work are appropriately investigated and resolved. The study was conducted in accordance with the Declaration of Helsinki (as revised in 2013). Informed consent was taken from all individual participants.