Cystic Echinococcosis (CE) is a continuing serious public health problem in endemic area (1).The two most frequent locations are liver and lung (1). Extrahepatic and lung CE are rare (2). The problems raised by echinococcosis vary according to its location (2). Diagnosis and management of each location have their particularities (2). The prevalence of pancreatic cystic echinococcosis (PCE) is ranging between 0.2% and 0.6% (3). The diagnosis of PCE is easy when it is associated with liver CE; it becomes difficult when PCE was isolated simulating other diagnosis (3). Ultrasonography and magnetic resonance imaging are very useful to confirm diagnosis (3). The therapeutic decision depends on the PCE location: conservative surgery for the head of the pancreas and radical surgery for body and/or tail of the pancreas (3). Medical treatment (albendazole) should be prescribed one week before surgery and two months during the postoperative period (3).

This article aimed to present a case of isolated PCE that simulated a mucinous cyst. The diagnosis of PCE was retained intraoperatively. A radical surgery was performed.

In this video article, we presented the case of a 55-year-old man, who had previously two episodes of acute pancreatitis on August 2016 and January 2017 that favorably managed with medical treatment in another center. On February 22nd, 2017, he was admitted with the diagnosis of pancreatic pseudocyst. Abdominal exam was normal.

Computed Tomography scan (CT scan) dated on February 23rd, 2017 revealed a dilation of Wirsung duct accompanied with a multiloculated cyst localized in the body and tail of the pancreas. Common bile duct was normal. The patient complained during hospitalization of a third episode of acute pancreatitis that was confirmed by lipasemia level at 20 folds of normal value. Ranson bio clinical score was one. He had a well recovery after one week with normal lipasemia.

Pancreatic Magnetic Resonance Imaging (Pancreatic MRI) on March 6th, 2017 showed the same description, however diagnosis of mucinous cyst of the pancreas was raised. Final decision was “wait and watch” with a planned CT scan one month later. The patient left hospital on March 7th, 2017. 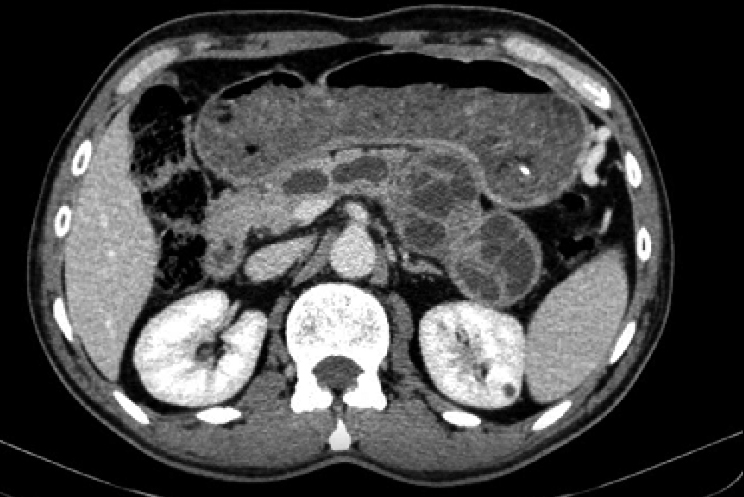 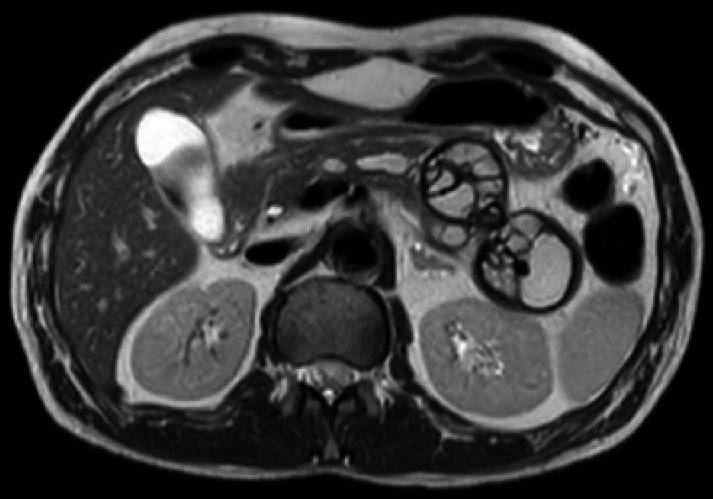 On June 12th, 2017, the patient was Re hospitalized for a fourth episode of acute pancreatitis. The Staff Decision (June 12th, 2017) concluded that the case concerned a 55 year-old-male, ASA1, who had previously four episodes of acute pancreatitis, presented a pancreatic cyst evoking an Intra ductal Papillary Mucinous Neoplasm. Another CT scan was performed on October 26th, 2017 and then spleno-pancreatectomy was planned. He was operated on November 11th, 2017.

The post-operative course was uneventful. The two drains provided a serous and hematic liquid with an average of 33 mL/day. On the fifth postoperative day, amylase in the drainage liquid was at normal level. He was discharged on postoperative day 7.

He was re admitted in the surgical department on postoperative day 26 with the diagnosis of postoperative pancreatic fistula (POPF). Physical exam showed a patient with a good status health. No organ failure was noticed. The sub costal incision healed, however there was a POPF raised through the orifice of the previous drainage providing a serous liquid with an average of 50ml/day. CT scan, performed at admission, showed a fluid collection in front of the pancreatic transection communicating the Wirsung duct with skin. This POPF was medically managed with favorable aftermath as confirmed by CT scan on the 23rd day after re admission. The patient was discharged on January 18th, 2018. No Anti cystic echinococcosis drug was prescribed. After a follow up of eight months, no recurrence was observed (Figure 3: case report timeline figure). 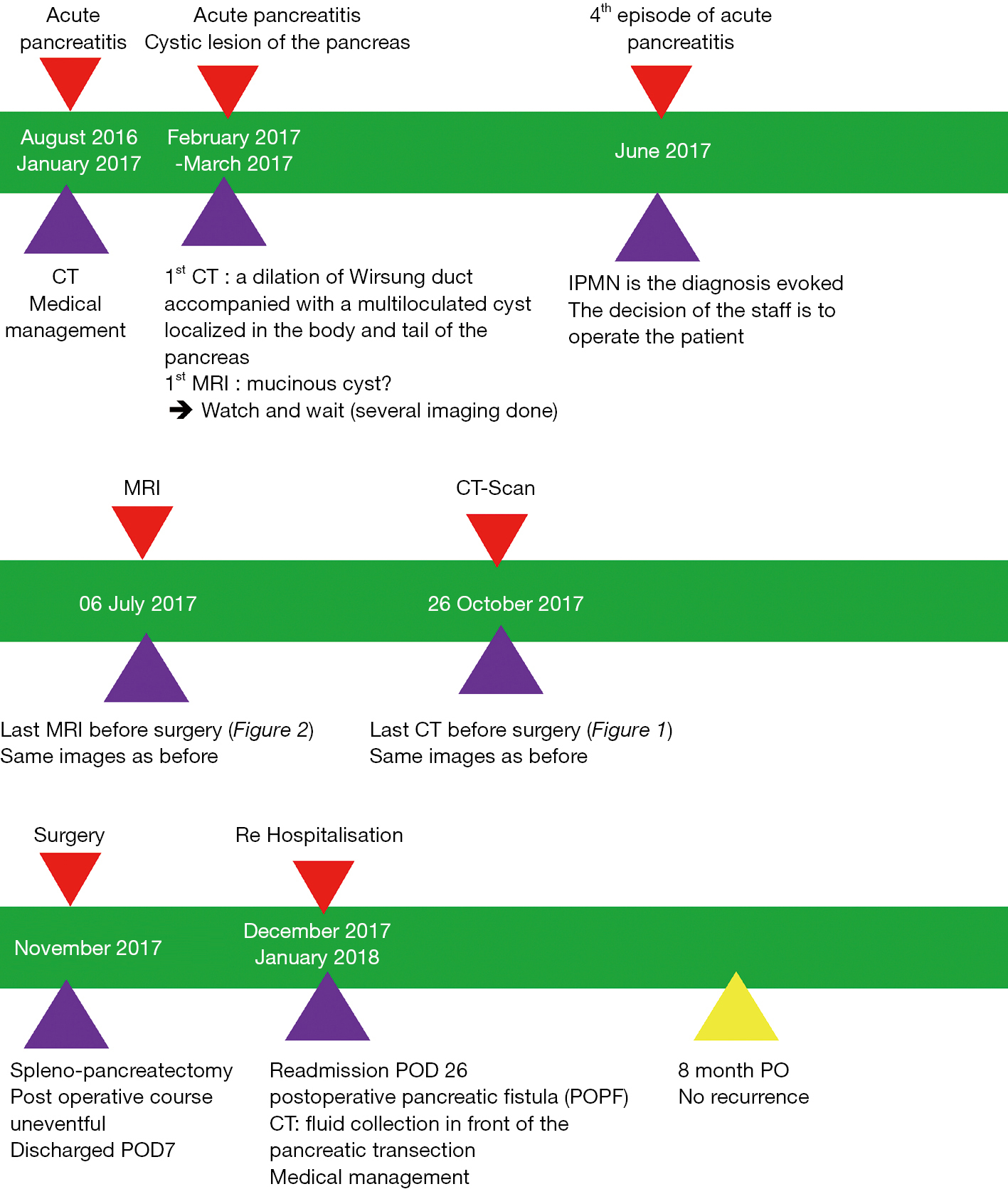 In this video article, we presented a case of isolated PCE that simulated a mucinous cyst. An epigastric pain was the main symptom evoking an acute pancreatitis regarding the high level of lipasemia. The Computed Tomographic scan and magnetic resonance imaging were in favor of pancreatic cyst evoking an Intra ductal Papillary Mucinous Neoplasm. The diagnosis of PCE located in the body and tail was recognized intraoperatively. A spleno distal pancreatectomy (radical surgery) was performed.

The main “take away” lesson from this case is that diagnosis of PCE is difficult when PCE was isolated simulating other diagnosis. On the other hand, diagnosis of PCE becomes easy when it is associated with liver CE. The therapeutic decision depends on the PCE location: conservative surgery for the head of the pancreas and radical surgery for body and/or tail of the pancreas. Surgeons should take care for the dissemination of echinococcosis.

The limitations of this report were three: (I) an intraoperative ultrasonography should have been performed to identify the content and the limits before positioning the stapler; (II) a protection with soaked mesh in hypersaline solution should have been useful to prevent further peritoneal dissemination and (III) anti cystic echinococcosis drug was indicated during the postoperative course for three months.

Reporting Checklist: The authors have completed the CARE reporting checklist. Available at http://dx.doi.org/10.21037/ales-2019-11

Conflicts of Interest: All authors have completed the ICMJE uniform disclosure form (available at http://dx.doi.org/10.21037/ales-2019-11). The authors have no conflicts of interest to declare.

Ethical Statement: The authors are accountable for all aspects of the work in ensuring that questions related to the accuracy or integrity of any part of the work are appropriately investigated and resolved. The study was conducted in accordance with the Declaration of Helsinki (as revised in 2013). Written informed consent was waived as patient identification and information remained anonymous for publication of this manuscript and any accompanying images.