Esophageal cancer is one of the leading causes of cancer-related death worldwide. In the Asia-Pacific region, including Japan, the vast majority of esophageal cancers are squamous cell carcinomas (SCC) (1). In contrast, esophageal SCC is rare in western countries, where most esophageal cancers are adenocarcinomas at the lower portion of the thoracic esophagus (2). Esophagectomy with two- or three-field lymphadenectomy plays a major role in achieving locoregional control as part of the treatment strategy for resectable thoracic esophageal cancer. However, esophagectomy is a highly invasive procedure that can lead to severe postoperative complications (3). Therefore, minimally invasive esophagectomy (MIE) with the thoracoscopic and/or laparoscopic approach has been recently developed and widely performed worldwide. However, there is currently no established evidence supporting the use of MIE as an alternative to open esophagectomy for esophageal cancer (4). In thoracoscopic esophagectomy (TE), the patient is placed in the left lateral decubitus position (LD-TE), prone position (prone TE), or hybrid position combining the left lateral decubitus and prone positions (hybrid TE) (5-9). However, only a few studies have compared the clinical utility of TE with the patient in these positions.

In our institute, prone TE was introduced in 2014, and hybrid TE has been performed since March 2017. The present study compared the short-term postoperative outcomes of prone TE versus hybrid TE.

Prone TE was performed under general anesthesia with a single-lumen endotracheal tube. Patients were placed on the operating table in the prone position, with the right side of the upper body slightly elevated on a bolster. The first port was inserted using the visually guided optical view method, and the other trocars were placed under direct thoracoscopic vision after lung deflation as shown in Figure 1A. The procedures were performed using either a two-dimensional high definition video system (VISERA ELITE, Olympus, Tokyo, Japan) with a flexible scope or an ultra-high definition video system (VISERA 4K UHD, Olympus) with a 30° rigid scope. Extended radical lymphadenectomy was performed from the lower to the upper mediastinum. 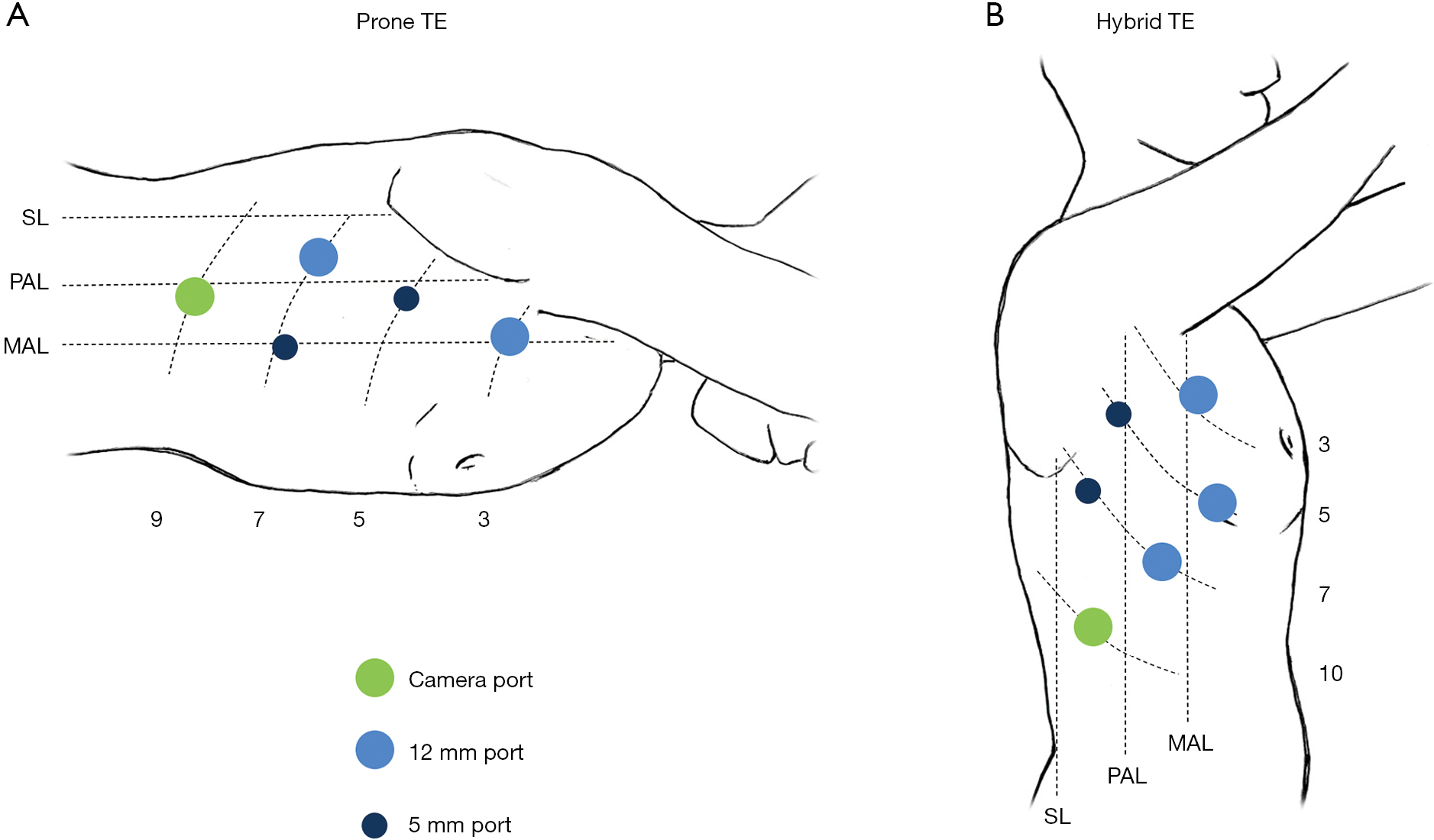 Hybrid TE was performed under general anesthesia with selective intubation to block the right lung. Patients were placed in the left semi-prone position, and the operating table was then rotated to create the left lateral decubitus position. The first port was inserted using an open technique or via mini-thoracotomy, and the other trocars were placed as shown in Figure 1B. A three-dimensional high definition video system with a flexible scope (ENDOEYE FLEX 3D, Olympus) was used for the procedures. Extended radical lymphadenectomy was performed from the upper to the lower mediastinum. After the upper mediastinal procedure was performed, the patients were moved to the prone position by rotating the operating table, and then the lower and middle mediastinal procedures were performed (Figure 2) (9).

Figure 2 Intraoperative images of hybrid thoracoscopic esophagectomy in the left lateral decubitus position (A) and prone position (B).

In both procedures, artificial pneumothorax was achieved using carbon dioxide at a pressure of 8 mmHg to collapse the right lung and expand the mediastinum. The surgeon used a grasper in the left hand and a monopolar electrocautery, ultrasound-activated device, or bipolar tissue-fusion system in the right hand. The azygos arch was divided using a linear stapler. The right bronchial artery was dissected, while the left bronchial artery was preserved. The upper mediastinal lymphadenectomy along the bilateral recurrent laryngeal nerves (numbers 106recR and 106recL) was performed mainly using micro-scissors (Figure 3). The upper or lower thoracic esophagus was divided using a linear stapler, depending on the tumor location. The thoracic duct was dissected with the esophagus when tumor invasion was suspected. After the thoracoscopic procedures were completed, a 24 Fr chest tube was inserted in the right chest cavity. The patient was placed in the supine position, and then the laparoscopic or open abdominal procedure and cervical procedure were performed. Bilateral cervical lymph node dissection was generally performed for advanced SCC and superficial SCC located in the middle or upper thoracic esophagus, except for patients with low surgical tolerance or those considered high surgical risk patients. Gastric conduit was mainly used for reconstruction in one-stage surgery; the right colon was used in one-stage surgery and in second-stage surgery in patients with concomitant gastric cancer or a history of gastrectomy. The gastric conduit was pulled up to the neck through the posterior mediastinal, retrosternal, or subcutaneous route, depending on the tumor stage or patient condition. The subcutaneous route was used for reconstruction with the right colon. The cervical esophagus and gastric conduit or terminal ileum were anastomosed using hand-suturing techniques. 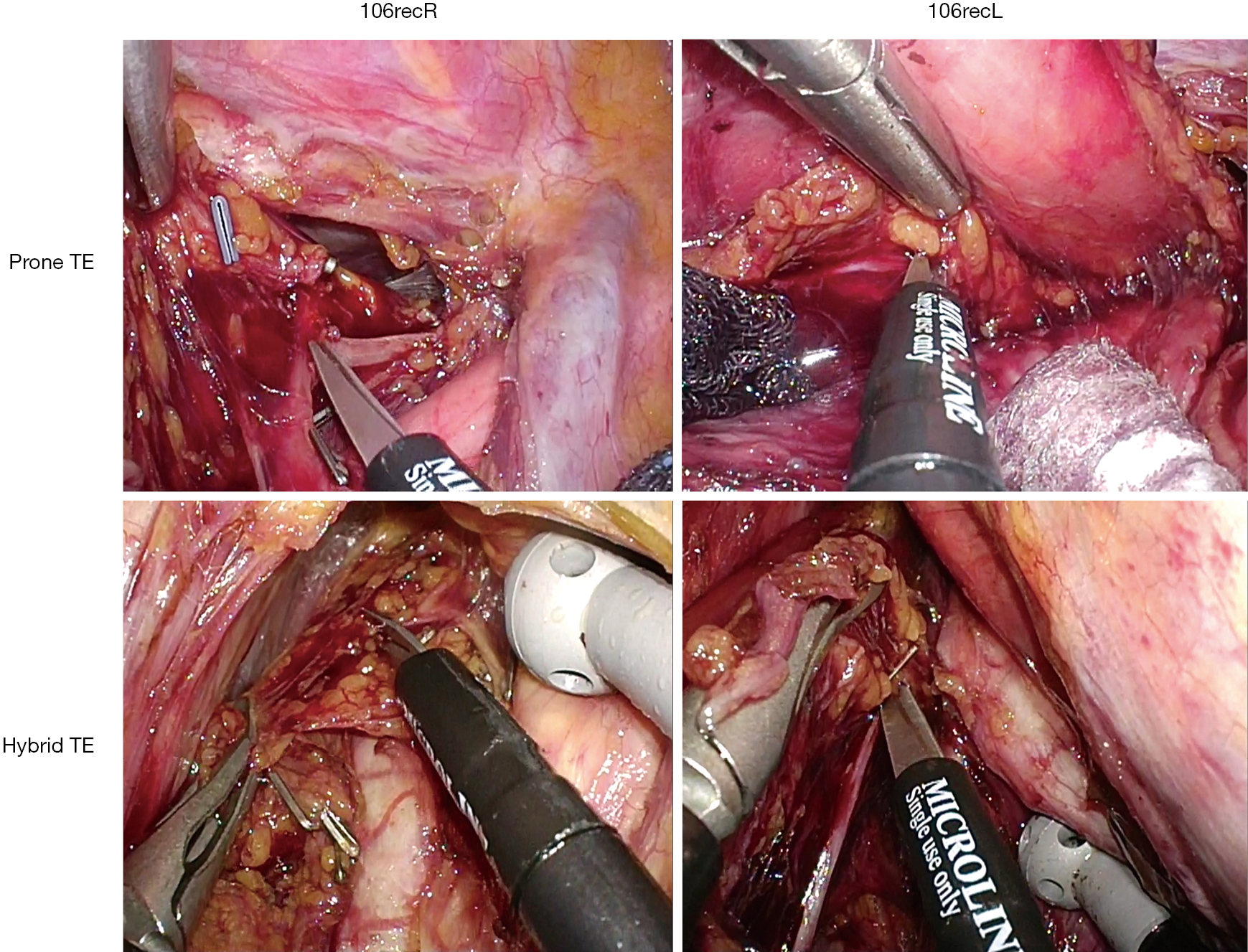 Postoperative complications including pneumonia, anastomotic leakage, and recurrent laryngeal nerve paresis were evaluated in accordance with the Clavien-Dindo classification (10). Pneumonia was defined as the evidence of pulmonary infiltration and/or consolidation on chest radiography or chest computed tomography (CT) scan. Anastomotic leakage was defined as the presence of signs indicating clinical leakage and/or findings of radiographic leakage by esophagogram or CT scan. Atelectasis was defined as an area of no ventilation and/or collapse identified on chest radiography or chest CT scan. Recurrent laryngeal nerve paresis was defined as the presence of hoarseness and/or laryngoscopic vocal cord palsy.

Clinicopathological data and operative and postoperative courses were retrospectively reviewed. The primary endpoint was the short-term postoperative outcome, which was compared between the prone TE and hybrid TE groups. 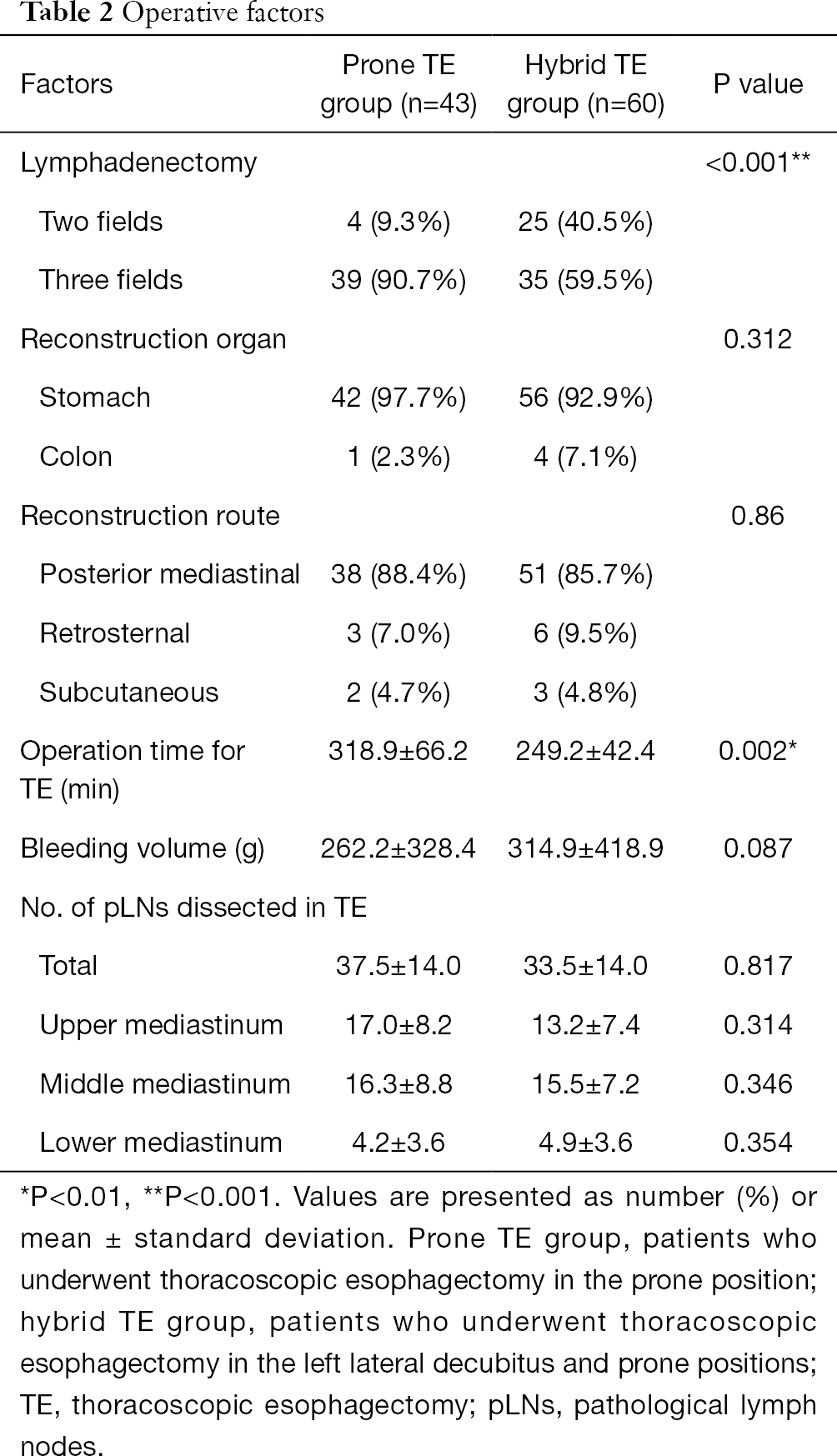 The rate of recurrent laryngeal nerve paralysis (Clavien-Dindo grade ≥I) was significantly lower in the hybrid TE group than the prone TE group (41.9% vs. 11.7%, P<0.001), whereas there were no significant differences between groups in the rates of recurrent laryngeal nerve paralysis classified as Clavien-Dindo grade ≥II or ≥III. There were no differences between the two groups in the rates of anastomotic leakage, atelectasis, or pneumonia of any Clavien-Dindo grade (Table 3). There was no 30-day mortality or in-hospital mortality in either group. 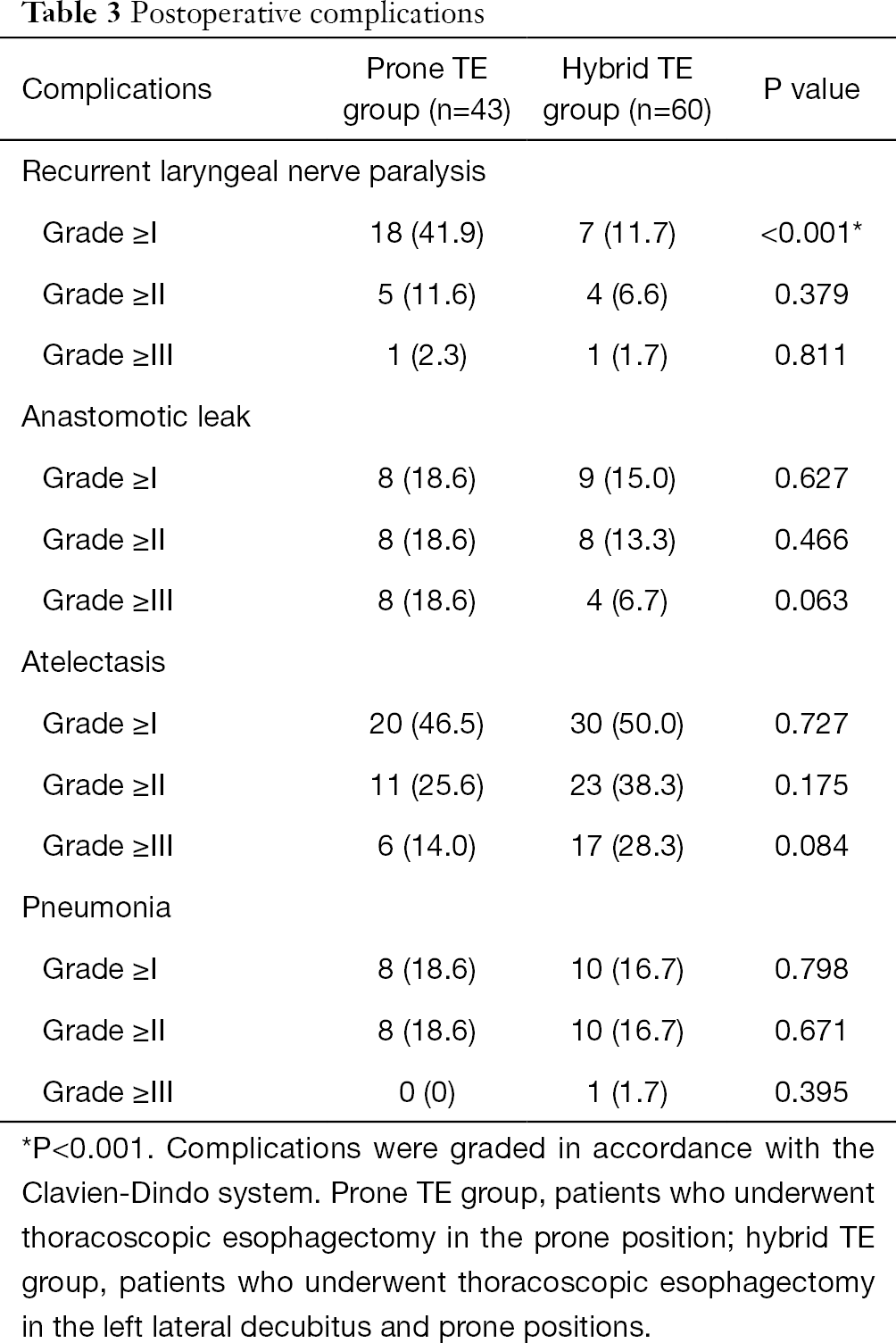 MIE through the right thoracic approach in the lateral decubitus position (LD-TE) was first reported in 1992, combining the laparoscopic approach with reconstruction via a gastric conduit anastomosed to the neck (11). LD-TE with mediastinal lymphadenectomy was subsequently reported by others (5,6,12). In 1994, the first case series of six patients who underwent prone TE was reported (7), and later studies reported on higher numbers of patients who underwent prone TE (13-15). However, these initial reports showed high rates of conversion to open thoracotomy and postoperative respiratory complications, and therefore did not show a convincing advantage of the thoracoscopic approach.

In 2006, a study evaluating prone TE with insufflation at a pressure of 6–8 mmHg reported no conversions to an open procedure and a very low incidence of postoperative pneumonia (16). In 2010, another study reported that 43 patients with esophageal cancer who underwent prone TE had a significantly lower total estimated blood loss compared with 34 patients who underwent LD-TE as a historical control (8). Since the publication of these studies with promising outcomes and the subsequent technical improvements, prone TE has been introduced as a MIE in many institutes, while some institutes still prefer LD-TE.

The hybrid TE procedure was developed in 2009 and reported in 2014 (9). In the first report of hybrid TE, the number of harvested mediastinal nodes and the PaO2/FiO2 ratio on postoperative day 1 were both greater in the hybrid TE group compared with the group who underwent LD-TE in earlier years (9). In addition, there were no significant differences between groups in the in-hospital mortality or the rate of complications other than vocal cord palsy, which was more frequently observed after hybrid TE than after LD-TE (9).

The present study is the first to compare the clinical outcomes of prone TE and hybrid TE. However, there were some differences between the two groups in the patient background characteristics and operative factors. Regarding the patient background characteristics, there was a significantly greater proportion of females in the prone TE group than the hybrid TE group; this may have occurred by chance, as there was no bias for patient sex in the indication of TE. Regarding the operative factors, as prone TE was indicated only for superficial cancers in its introductory phase, the prone TE group inevitably had a smaller tumor depth, lesser grade of lymph node metastasis, and less severe tumor stage than the hybrid TE group. Furthermore, the rate of lower thoracic and esophagogastric junction cancers tended to increase over the study period; although this increase was not statistically significant, it may have at least partially contributed to the significantly lower rate of patients who underwent three-field radical lymphadenectomy in the hybrid TE group compared with the prone TE group. Despite these differences between the two groups, the present study showed the superiority of hybrid TE over prone TE in terms of a shorter operation time for TE and less recurrent laryngeal nerve paralysis.

There are several limitations in the present study. First, as this was a retrospective study conducted in a single institute that compared data collected in different time periods, there were some differences between groups in patient background characteristics. Second, the operative outcomes of prone TE and hybrid TE may have been affected by other factors such as the different video systems used for TE, the development of surgical instruments and the technical development of surgeons and surgical teams during the study period, and improvements in perioperative care with advanced rehabilitation and nutrient supports. However, hybrid TE appears to have potential advantages over prone TE in performing upper mediastinal lymphadenectomy, which may have contributed to the lower rate of recurrent laryngeal nerve paralysis after hybrid TE versus prone TE.

Recently, robot-assisted thoracic esophagectomy (RTE) using the da Vinci® robotic system (Intuitive Surgical, Sunnyvale, CA, USA) has been increasingly performed for esophageal cancers, and appears to have the potential to overcome the limitations of conventional TE and to improve the short-term postoperative outcomes of TE (17,18). The first report of RTE in 2006 described RTE performed in the left lateral decubitus position (19), while the first reports of RTE in the prone position were published in 2010 (20) and 2011 (21). In RTE using the da Vinci® surgical system, the consistent prone position seems satisfactory for the performance of the lower to upper mediastinal procedures; however, the advantages of hybrid TE over prone TE during the upper mediastinal procedures may help improve the potential limitations of future RTE using new robotic systems.

In our series of patients who underwent TE for resectable esophageal cancer, the hybrid TE group had a shorter operation time for the thoracoscopic procedure and a lower rate of recurrent laryngeal nerve paralysis than the prone TE group. Although further studies are needed to compare the operative outcomes of hybrid TE versus prone TE in a prospective manner, hybrid TE appears to have advantages over prone TE, especially during the upper mediastinal procedures.

We thank Kelly Zammit, BVSc, from Edanz Editing (www.edanzediting.com/ac), for editing a draft of this manuscript.

Ethical Statement: The authors are accountable for all aspects of the work in ensuring that questions related to the accuracy or integrity of any part of the work are appropriately investigated and resolved. The study was approved by the institutional review board of the Hamamatsu University Hospital.