In the United States, gallstone disease remains a prevalent condition affecting over 20 to 25 million Americans, representing 10–15% of the population (1,2). Although not every patient with gallstones will manifest symptoms or require intervention, laparoscopic cholecystectomy (LC), which accounts for 90% of all cholecystectomies, remains one of the most commonly performed procedures—conservatively numbering 750,000 per year (3). Since its introduction in the 1980s and subsequent adoption, LC has become the standard of care due to its advantages of reduced cost and hospital length of stay, and increased patient satisfaction (4,5). Overall, LC is considered a safe procedure, as morbidity can occur in approximately 6–8% of the patients (6), including bleeding, abscess, bile leak, bowel/vascular injury, wound complication, and bile duct injury (BDI) (6,7). Although bile duct injury has been become less frequent over the years, occurring in approximately 0.2–0.4% of cases, the frequency is still somewhat higher than in the era of open cholecystectomy (8,9). Thus, performing laparoscopic cholecystectomy safely and embracing the principles outlined below is crucial.

BDI has been associated with other complications and the necessity for further procedures/interventions, higher mortality, lower quality of life and disability, increased healthcare burden and litigation (10,11). Studies have shown both increased short and long-term mortality due to BDI (12). In order to enhance the safety of cholecystectomy and reduce the rate of biliary injury, in 2014 the Society of Gastrointestinal and Endoscopic Surgeons (SAGES) formed the Safe Cholecystectomy Task Force with the goal of enhancing a culture of safety around this procedure (13). The authors report the surgical techniques that follow the principles espoused by SAGES during laparoscopic cholecystectomy in order to ensure a safe procedure.

The patient is placed in supine position with the left arm tucked to facilitate intraoperative cholangiography.

With the surgeon standing to the left of the patient and first assistant standing on the patient’s right side, abdominal access is obtained and pneumoperitoneum is established. In our practice, we generally perform an open cutdown technique and Hasson cannula placement at the umbilicus (T1 position) (Figure 1). In patients with prior periumbilical midline incisions, an alternative access site is used, either closed with a Verres needle in the right upper quadrant mid-clavicular below the liver or left upper quadrant (Palmer’s point) or via an open epigastric incision. In the obese patient, a closed Verres needle access is obtained just to the right of the midline 15 cm below the xiphoid since the umbilicus is displaced inferiorly in these patients; this allows the camera port to be positioned for adequate visualization of the dissection site. After creation of the pneumoperitoneum, 5 mm ports are placed in the right lateral subcostal position (T2) and right subcostal mid-clavicular line (T3), along with a 5 mm epigastric port (T4), which is inserted just to the right edge of the falciform ligament. A grasper introduced from T2 is used to apply cephalad traction on the fundus to elevate the gallbladder and a grasper through the mid-clavicular port retracts the infundibulum laterally and inferior. The working trocars that are used by the surgeon are T3 and T4. 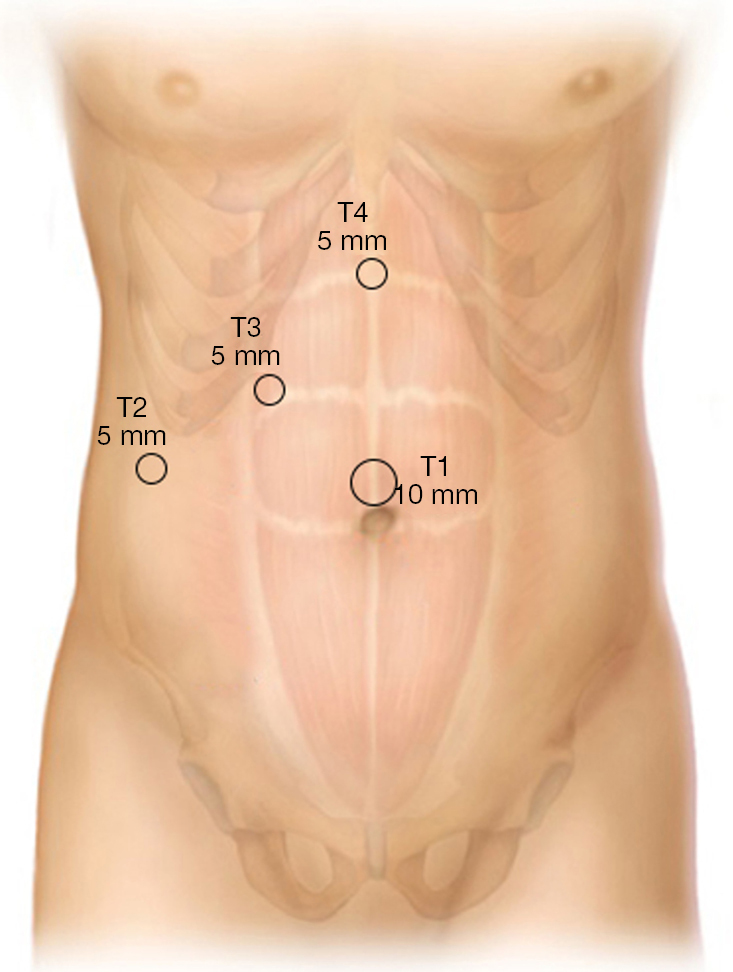 Step 1: Dissection of the hepatocystic triangle

The gallbladder is retracted over the liver with cephalic traction while inferior-lateral traction on the neck of the gallbladder is applied through the midclavicular port site. The assistant can usually maintain constant tension on this retractor unless adjustments are required for changes in visualization. Using T3, the surgeon can manipulate the neck of the gallbladder to expose anterior (medial) and posterior (lateral) aspects as needed. If the gallbladder is distended, we recommend decompressing it with a needle aspiration device to avoid perforation with spillage of bile and gallstones. If adhesions are present, these are taken down bluntly or with monopolar energy taking care to avoid energy use near the duodenum which can be adherent to the gallbladder. The dissection begins by incising peritoneum along the edge of the gallbladder on both sides to open up the hepatocystic triangle. This can be carried up posteriorly along the wall of the gallbladder at its interface with the liver. A combination of blunt dissection and judicious use of cautery are needed with a goal of clearing the triangle of fat and fibrous tissue.

The critical view of safety requires three criteria to be met: (I) the hepatocystic triangle (defined as the triangle formed by the cystic duct, the common hepatic duct, and inferior edge of the liver) is cleared of all fat and fibrous tissue. The common bile duct and common hepatic duct are looked for but not exposed by dissection; (II) the lower one third of the gallbladder is separated from the liver to expose the cystic plate. The cystic plate is defined as the liver bed of the gallbladder and represents the gallbladder fossa; and (III) two and only two structures should be seen entering the gallbladder, representing the cystic duct and the cystic artery. Once this view is established, we recommend a pause and confirmation amongst the operating surgeon and assistant prior to clipping or cutting of any structures. At this juncture, identification of aberrant anatomy is critical. Variations in cystic duct position and entry into the common bile duct are common, as are variants in arterial anatomy. A thorough understanding and appreciation of aberrant anatomy is important to minimize the risk of an injury. One common consideration is ensuring the right hepatic artery is not mistaken for the cystic artery or accessory branch posteriorly in the area of the cystic plate.

In our institution to minimize costs, a reusable clip applier with 8mm clips is utilized to clip the cystic artery, two clips on the proximal side and one clip on the distal (specimen) side with an adequate gap between to allow for division. Hook scissors are used to divide the artery. Care should be taken during this process not to dislodge the proximal clips. We recommend leaving a small cuff of tissue beyond the edge of the clips to prevent accidental dislodgement either during the case or after. A clip is placed on the neck of the gallbladder at the upper end of the cystic duct-GB junction. Division right at the clip can predispose the distal specimen clip to become dislodged.

Step 4: Operative cholangiography and division of the cystic duct

It is our practice to perform cholangiography routinely. Cholangiography is more commonly performed selectively but compelling indications are suspicion of CBD stones (history of abnormal liver function tests or gallstone pancreatitis), a dilated common bile duct, uncertainty of anatomy or concern for biliary injury, and a history of Roux Y gastric bypass which precludes subsequent ERCP. If no cholangiogram is performed, similar to the cystic artery, the cystic duct can be clipped with three titanium clips, two on the stay side and one on the gallbladder specimen side. In cases in which the cystic duct is dilated or thickened or there are bile duct stones, a pre-tied endoloop suture should be used to secure the duct on the proximal side.

If an intraoperative cholangiogram is to be performed, a single clip is placed at the junction of the cystic duct and infundibulum of the gallbladder. The cystic duct is partially incised with hook scissors. The cystic ductotomy is then dilated with a microscissors in order to disrupt any valves in the cystic duct. A 4 French ureteral catheter is then inserted into the cystic duct using an Olson cholangioclamp to secure it. Single spot films are used to adjust the position of the C-arm so that both the entire biliary tree and duodenum can be visualized in the center of the frame. We utilize two 20 mL syringes, one containing saline and the other a 50-50 mixture of saline and iodinated contrast media attached via a three-way stopcock for injection. The duct is initially flushed with saline and then contrast under fluoroscopy. One should see retrograde filling into the common hepatic duct as well as right and left branches into the liver and contrast should flow freely into the duodenum, ensuring a patent biliary tree. If there is no entry of contrast into the duodenum, glucagon 1 mg should be given intravenously to relax the sphincter of Oddi and the injection repeated in 2–3 minutes. If difficulty is encountered with retrograde filling of the duct, placing the patient in Trendelenburg, gently compressing the distal duct with an atraumatic grasper, or injection of morphine intravenously can be given to facilitate contracture of the sphincter. If a stone is visualized in the bile duct, then the decision should be made whether to attempt a trans-cystic common bile duct exploration, laparoscopic choledochotomy, or referral for postoperative ERCP, according to surgeon expertise and preference.

Once a satisfactory cholangiogram is obtained, the cholangiogram catheter is removed, and the cystic duct is doubly clipped and divided. As stated above, if there is concern about the security of the clips on the cystic duct, a pre-tied loop suture should be used to secure the duct instead.

Following division of the cystic duct, retrograde dissection of the gallbladder from the liver bed is performed. In our institution, we use an L-hook monopolar energy device to dissect gallbladder off the liver. Care should be taken to stay in the plane between the gallbladder and liver bed. Entry into the liver bed may result in bleeding and/or bile leakage from a superficial subparenchymal duct. Entry into the gallbladder with spillage of bile and stones make subsequent dissection more difficult, but should not have any adverse consequences as long as all bile and stones are removed from the field. Maintaining appropriate retraction by moving the neck of the gallbladder back and forth to optimize visualization and maintaining tension on the dissection line facilitates this step in the operation. For the difficult gallbladder in the setting of acute cholecystitis, an advanced energy device such as an ultrasonic coagulator may maintain hemostasis basis better and produce less smoke plume, which makes the dissection easier and more efficient. Just prior to complete disassociation of the gallbladder from its bed, the last attachment should be left in place to allow for retraction of the liver cephalad and clear visualization of the cystic plate to allow for any needed hemostasis. The liver bed is irrigated and any blood or bile or aspirated from the field. The gallbladder is then placed in an entrapment bag and removed at the 10–12 mm port site.

Once the specimen is in the bag, it can be removed at the 10 mm port site whether at the umbilicus or epigastric region. These steps are summarized in our video (Video 1). Some enlargement of the skin and fascial opening may be needed, especially if there are multiple or larger stones or a thickened gallbladder. Once the specimen is removed, all ports are vented to eliminate any residual CO2 gas. The fascia at the extraction port site should be closed with 0-Vicryl or similar suture and the skin closed with an absorbable monofilament subcuticular suture.