Proctectomy for benign and malignant indications whether performed in an open or minimally invasive fashion represents a challenge with a steep learning curve for the surgeon. In the setting of rectal cancer, the popularization of total mesorectal excision (TME) has resulted in improved plane of dissection, nerve preservation, specimen quality and ultimately lower local recurrence rates. Unfortunately, in the presence of bulky tumors, a narrow male pelvis, or obesity, the procedure is more challenging with reported high morbidity rates and lower rates of clear surgical margins. The concept of an alternative, ‘bottom–up’ technique from the distal to the proximal mesorectal plane has evolved. Representing an evolution of direct target natural-orifice transluminal endoscopic surgery (1), initial cadaveric studies using transanal endoscopic microsurgery (2) led to the first human transanal TME (taTME) (3). TaTME enables direct visualization of the distal resection margin, may result in a more accurate distal complete excision of the mesorectum with wider resection margins, a lower rate of positive circumferential margins, and could increase the rate of sphincter-saving procedures (4). The availability of flexible, single use, transanal platforms under the umbrella term of transanal minimally invasive surgery further popularized this approach (5,6). After an initial phase of enthusiasm however, unique complications such as urethral injuries (7) and recent concern regarding oncologic outcome (8) has tempered dissemination of this technique.

Despite this, the principals and benefits of taTME also apply equally to transanal proctectomy for benign indications such as in the setting of inflammatory bowel disease (IBD). The uses for these conditions being in restorative and non-restorative procedures for Crohn’s disease (CD) and ulcerative colitis (UC). A transanal approach for restorative proctocolectomy with ileal pouch-anal anastomosis (IPAA) has particular advantages and its safety and feasibility has been demonstrated in small series. This paper examines the current literature exploring the use of transanal proctectomy using advanced transanal platforms for IBD. 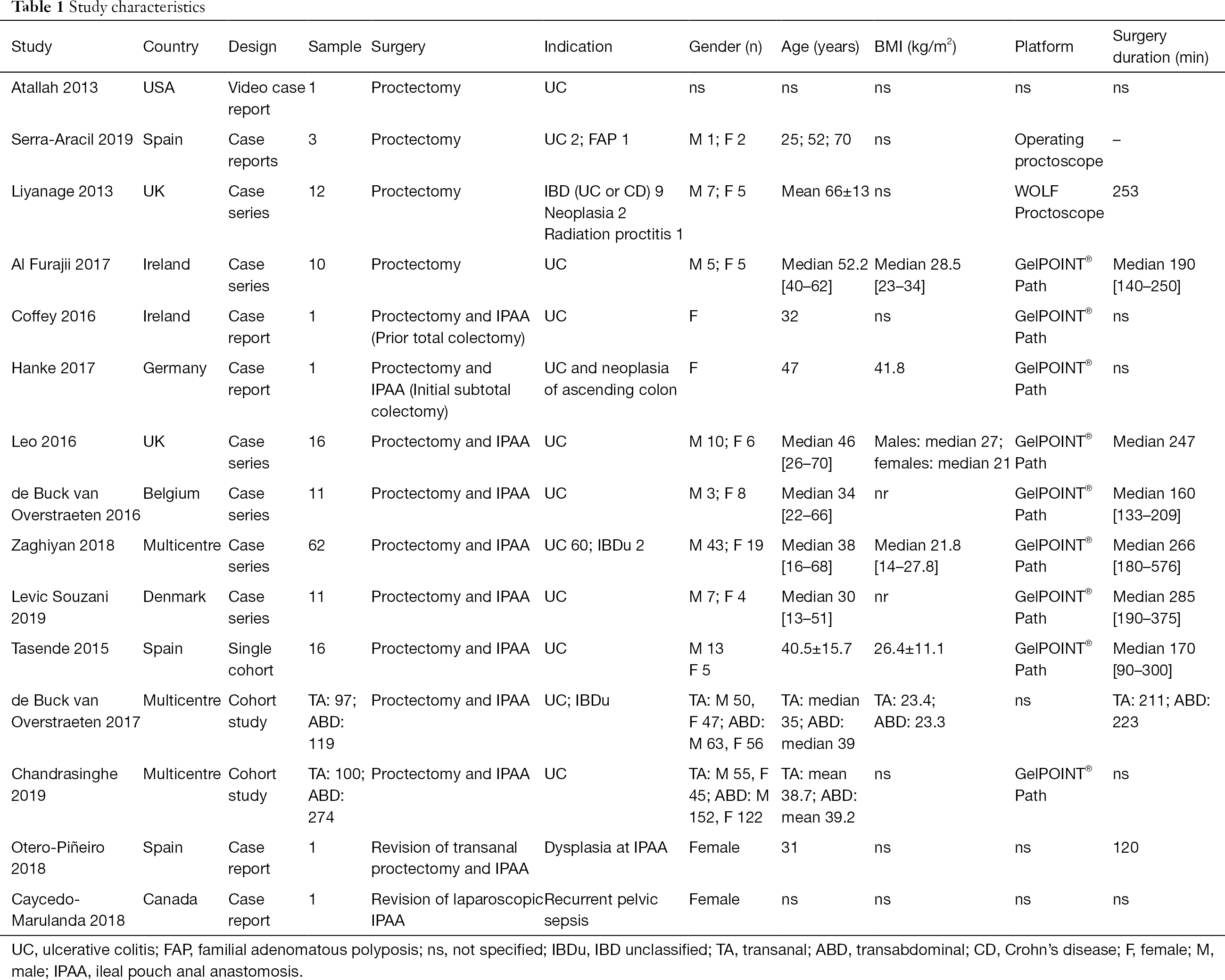 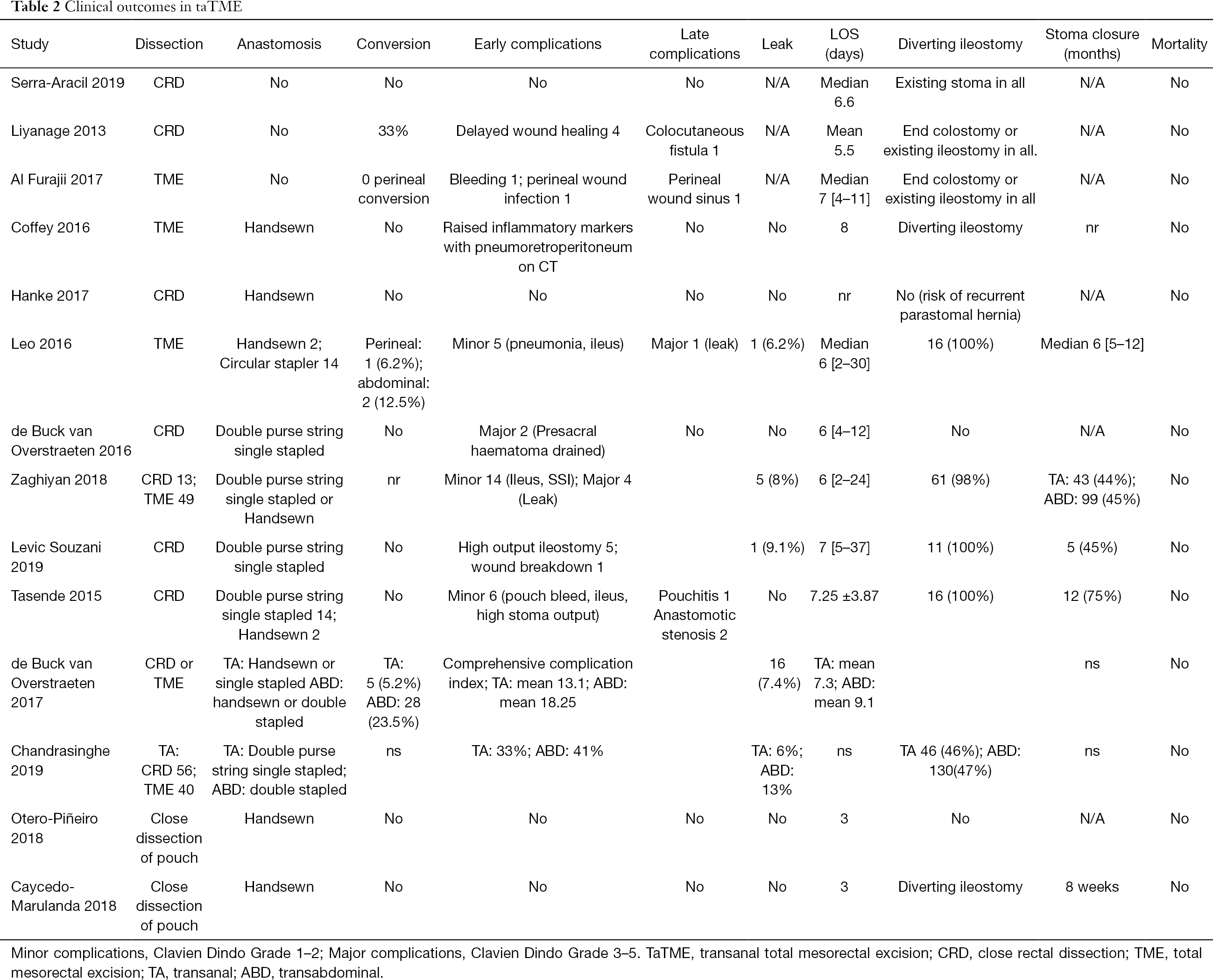 An initial role for taTME in IBD surgery included proctectomy for management of a residual rectal stump following subtotal colectomy in UC. Initial procedures utilising the approach were non-restorative. A video vignette published in 2013 by Atallah et al. illustrated the feasibility of the procedure (9). Further case reports and small case series from multiple centres demonstrated that taTME offered a minimally invasive option to avoid repeated abdominal surgery when managing a residual rectum (10-12). Authors described the use of a range of operating platforms and morbidity most frequently related to impaired healing of the perineal wound.

The application of taTME in IBD has further expanded to include restorative surgery for UC. Coffey et al. and Hanke et al. described case reports of proctectomy and IPAA performed successfully using the taTME approach (13,14). Further case series and a small number of cohort studies have followed as multiple centres gained experience in the use of taTME for IPAA (15-21). Four published case series described 100 patients who underwent transanal proctectomy in the course of multi-stage panproctocolectomy and IPAA formation for UC (17-19,21). A prospective cohort study described outcomes from 16 selected patients undergoing a planned three stage approach to restorative panproctocolectomy and IPAA formation (20). Increased numbers of cases of taTME in IBD have facilitated the publication of two large retrospective studies comparing outcomes between 197 cases of transanal proctectomy with IPAA and 393 cases of transabdominal proctectomy with IPAA formation in UC (15,16).

Transabdominal assistance during transanal proctectomy and IPAA was most commonly provided laparoscopically with many reducing abdominal incisions by employing a single incision laparoscopic port at the planned or existing ileostomy site. Open incision was reported less frequently and Pfannenstiel incisions were used predominantly. Formation of the ileal pouch was most commonly performed through the abdominal ileostomy site and less frequently at the open Pfannenstiel incision. In order to facilite pouch delivery to the pelvis authors reported using a range of drains or catheters placed on the stapler anvil to guide the pouch from the abdominal to perineal surgeon. Diversion ileostomy was used routinely by some surgeons while others performed a variety of one, two or three stage procedures.

Anastomotic leak rates reported varied from 6.2% to 9.1%. Surgical morbidity largely related to postoperative ileus, wound complications and high output ileostomy. The median length of stay ranged from 6 to 7.3 days across reported series and cohorts. Prolonged length of stay predominantly related to anastomotic complications. Late complications were reported by Tasende et al. and included pouchitis and anastomotic stricture which were managed with antibiotics and dilatation respectively (20). Conversion from the taTME approach was reported in three studies (11,16,18). Conversion to laparotomy or laparoscopy was reported for management of small bowel adhesions during the transabdominal phase while loss of dissection plane prompted conversion of the perineal phase.

taTME versus transabdominal TME in IBD

The majority of literature related to taTME in IBD is focused upon the surgical management of UC. Proctectomy may occasionally be indicated in extensive perianal CD or rectal involvement with failed attempts at best medical management (24). Adoption of transanal principles for proctectomy in the surgical management of CD was outlined by Gardenbroek et al. (25). The authors reported their institutional experience with intersphincteric proctectomy with dissection in the “close” plane at the bowel wall to preserve the rectal mesentery. Authors advocated the preservation of mesentery and vacuum closure devices to reduce dead space and reduce the risk of poor wound healing or persistent presacral sinus. These findings are in contrast to recent data showing increased perineal complications in CD after close rectal dissection than after total mesorectal excision (59.5% vs. 17.6%) with lower healing rates (51.4% vs. 88.2%) (26).

Increasing experience with the surgical approach has seen the technique for transanal proctectomy dissection modified from the standard TME approach employed for rectal cancer to the close rectal dissection plane (27). Close rectal dissection is expected to reduce the volume of deadspace remaining in the pelvis (28), providing a “cushion” to support the newly formed pouch and may reduce risk of injury to urological and nerve structures particularly during anterior dissection (29). A lower rate of severe complications is reported in taTME using the close rectal dissection rather than TME plane (29) and this approach is supported by the European Crohn's and Colitis Organization (ECCO) Evidence-Based Consensus on Surgery for UC (29,30).

Outcomes related to the dissection plane were reported by Chandrasinghe et al. (15). Similar quality of life and major incontinence rates were described while stool frequency > 10/24 hours occurred in 15% of TME patients versus 27% receiving close rectal dissection. Urological or sexual function was not compared between the dissection planes. Zaghiyan et al. reported a case series from three institutions where one centre employed close rectal dissection as a routine while the remaining sites adhered to the TME plane (21). No anastomotic complications were observed in the close rectal dissection group of patients or in those who received fluorescein angiography; although the difference in such complications was not statistically significant.

Functional outcomes following taTME are increasingly reported in the literature (Table 3). Tasende et al. provided a comprehensive report on their experience of transanal proctectomy as part of a three stage surgical management of UC (20). The authors collected data related to functional outcomes at an interval of three months following proctectomy in 12 patients. A mean defecatory frequency of 5.5 events in 24 hours was reported. A mean Oresland score of 4.7 and mean Wexner score of 1.4 was reported while patients denied urinary or sexual dysfunction.

As the volume of taTME procedures performed internationally has increased, surgeons have noted the development of procedure specific complications including carbon dioxide embolism (Table 4) and urethral injury (Table 5). Due to limited reports in IBD surgery, interrogation of the taTME literature for both IBD and malignant indications is necessary to enhance our understanding. Carbon dioxide embolism is thought to be associated with transfer of pneumorectum carbon dioxide into the pelvic veins with subsequent desaturation, ventilatory and cardiovascular compromise (31). The occurrence of carbon dioxide embolism is frequently described to occur at the time of bleeding from periprostatic, paravaginal or pelvic venous plexuses during dissection. Patient positioning is hypothesised to contribute as prolonged Trendelenburg position creates low pressure within the elevated pelvic venous system permitting gas entry (32). Use of spinal anaesthesia may contribute to further reduction in venous pressure by vasodilation (33). Application of pressure to maintain a stable pneumorectum within the confined pelvic space is a further contributory factor, particularly as gas cannot decompress through the closed bowel lumen (34).

Ratcliffe et al. (33) and Shiraishi et al. (35) described cases of carbon dioxide embolism during taTME for a rectal cancer. Ratcliffe et al. reported that the GelPOINT Mini® and AirSeal® insufflation at maximum 12 mmHg were utilised. The event was diagnosed by sudden desaturation, reduced end tidal carbon dioxide and hypotension. Harnsberger et al. (36) report their experience of carbon dioxide embolism from a single institutions case series of taTME. Eight taTME performed with benign and malignant indications were reviewed from a four-year period and three cases (4%) of clinically significant intraoperative carbon dioxide embolism identified. Carbon dioxide embolism coincided with bleeding from periprostatic or paravaginal veins in all cases. The incidence of carbon dioxide embolism was examined by Dickson et al. (31) in a collection of case reports generated by contributors to taTME registries. Seventeen centres from 10 countries reported experiencing carbon dioxide embolism intra-operatively. This represented an estimated incidence of 0.4% (25/6,375 cases from reporting centres). Three of the included patients underwent proctectomy for UC with two involving IPAA formation. In 24 of 25 cases the AirSeal® system was used while high pressure insufflation was used in the remaining case. Median transanal insufflation pressure was 15 mmHg (range 12–20 mmHg). The earliest clinical sign noted in most cases was a reduction in the end tidal CO2. Echocardiography was performed in eight cases after carbon dioxide embolism and demonstrated gas bubbles within the heart chambers. Cardiovascular collapse necessitating CPR occurred in two patients while a third developed ventricular tachycardia and fibrillation. In 21 cases it was possible to continue the surgery after establishing cardiovascular stability, albeit converting to open surgery in seven and transabdominal laparoscopic surgery in 13. Visible bleeding was evident in 21 of 25 cases at the time of embolism with periprostatic venous bleeding reported most commonly.

Sylla et al. (7) on behalf of the International taTME Urethral Injury Collaborative detailed the nature of 39 urethral injuries complicating taTME in a multicentre self reported study. Thirty-two centres in 20 countries self-reported urological injury occurring during taTME between April 2010 and September 2017 through an anonymous structured survey. Thirty-eight patients were male and the indication for surgery was rectal cancer in 38 cases versus one case of UC. Sixteen patients had a prior diagnosis of benign prostatic hyperplasia or had undergone urological surgery or prostatic radiotherapy. Thirty-six urethral injuries were recognised intraoperatively and were repaired transperineally in 26 with added insertion of a cystostomy in one case. Complications included four urethral strictures, one urethral dehiscence, three rectourethral fistulae and permanent catheterisation or cystostomy in five patients. Thirty-four patients had successful removal of catheters and 23 of this group reported normal urinary function at follow-up. One would hope due to the non-oncologic dissection of a proctectomy for IBD, the risk of urethral injury should be lower.

Review of the published literature demonstrates the safety and feasibility of taTME approaches for indications including completion proctectomy, restorative proctocolectomy and IPAA. Rare but important complications including urethral injury and carbon dioxide embolism require consideration when performing taTME surgery. Close rectal dissection may be advantageous in taTME for benign indications. Increased reporting of functional and patient reported outcomes is desirable to allow comprehensive assessment of the role of taTME in IBD surgery.