Site of extraction for laparoscopic colectomy: review and technique

After the introduction of laparoscopic cholecystectomy three decades ago, laparoscopic techniques have been extensively implemented in many arenas of surgery, including colon surgery. Numerous clinical trials and meta-analyses have shown the beneficial outcomes of laparoscopic colon surgery, which includes reduced pain, earlier recovery and shorter length of stay at the hospital (1).

Incisional hernia (IH) has an impressive economic burden on the healthcare system, and profound physiological and psychological effects on patients (3,4). IH is a common long-term complication after open colon surgery, found in about 20% of the patients who undergo the procedure. Trocar-site and specimen extraction site both can also cause IH after laparoscopic colorectal surgery but the latter contributes more to the incidence of IH and is the most important modifiable factor to influence IH in laparoscopic colectomy (5-8).

Wound infection is another dreaded postoperative complication that can result in an increased hospital length of stay, recovery time and burden of cost on healthcare system (12,13). Wound infection rates between 5% and 30% have been reported in patients who undergo colon surgery (14-18). Due to the fundamental difference between the technique of laparoscopic and open colon surgery, it was expected that the wound infection rate would be lower with a laparoscopic technique as it was in other surgical specialties (19,20). However, it has been observed that the extraction site behaves in a similar manner as a traditional midline incision in terms of wound-related complications (11).

Due to the above-mentioned concerns, there is a growing desire among surgeons to optimize the size and location of the specimen extraction incision in order to retain the maximum advantages of a minimally invasive procedure. This has led surgeons to investigate different approaches to specimen retrieval: from an incision at or away from the port sites to methods for extracting the specimen without a need for an incision altogether. Here, we discuss different approaches to specimen extraction after laparoscopic colectomy.

The advantage of this technique is its rapidity and that an entirely separate incision is not needed for the extraction of the specimen. In addition, the circumference of the cutaneous scar can be hidden by the umbilical scar. Naturally the cosmetic advantage of this approach is limited by the size of the specimen being extracted as it may not be an appropriate approach for the extraction of a specimen greater than 6 or 7 cm (8). In addition, there is a high rate of subsequent umbilical IHs (4).

Transverse incision through the right or left iliac fossa

Iliac incisions are made parallel to the inguinal ligament. The incision starts medially to the anterior superior iliac spine and terminates at the lateral border of the rectus muscle. The external oblique, internal oblique, transverse muscle and transverse fascia are dissected exposing the peritoneum which is then dissected with fingers (22).

This technique is useful for removal of a large specimen. The right iliac fossa is used for the retrieval of the specimen if right hemicolectomy is done whereas the left iliac fossa is used if the left hemicolectomy or sigmoidectomy is done. The size of the incision is dependent on the diameter of the tumor to be delivered but in most cases the size is between 4 and 8 cm (23).

A study done by Kam et al. (24) included a retrospective review of 280 randomly selected patients who underwent open colon resections for colorectal cancer. 140 procedures were done with a midline incision whereas the other 140 were performed with an incision in the left iliac fossa. They concluded that the patients with incision in left iliac fossa had earlier ambulation, less narcotic use and length of stay at the hospital.

It is a lower abdominal transverse incision which was described by Pfannenstiel in 1900 (Figure 1) (25). This incision preserves the anterior fibrous sheath (including the aponeurosis formed by the fibers of external oblique, internal oblique and transversus muscle). In this technique, a low transverse skin crease is used as a surface marking for the Pfannenstiel incision. One common technique is incising the subcutaneous fat and the anterior rectus sheath along the same line of the skin incision. Flaps are raised between the anterior rectus sheath and the rectus muscle inferiorly up to the pubic symphysis. The rectus muscle is then split and the peritoneum is incised (26). 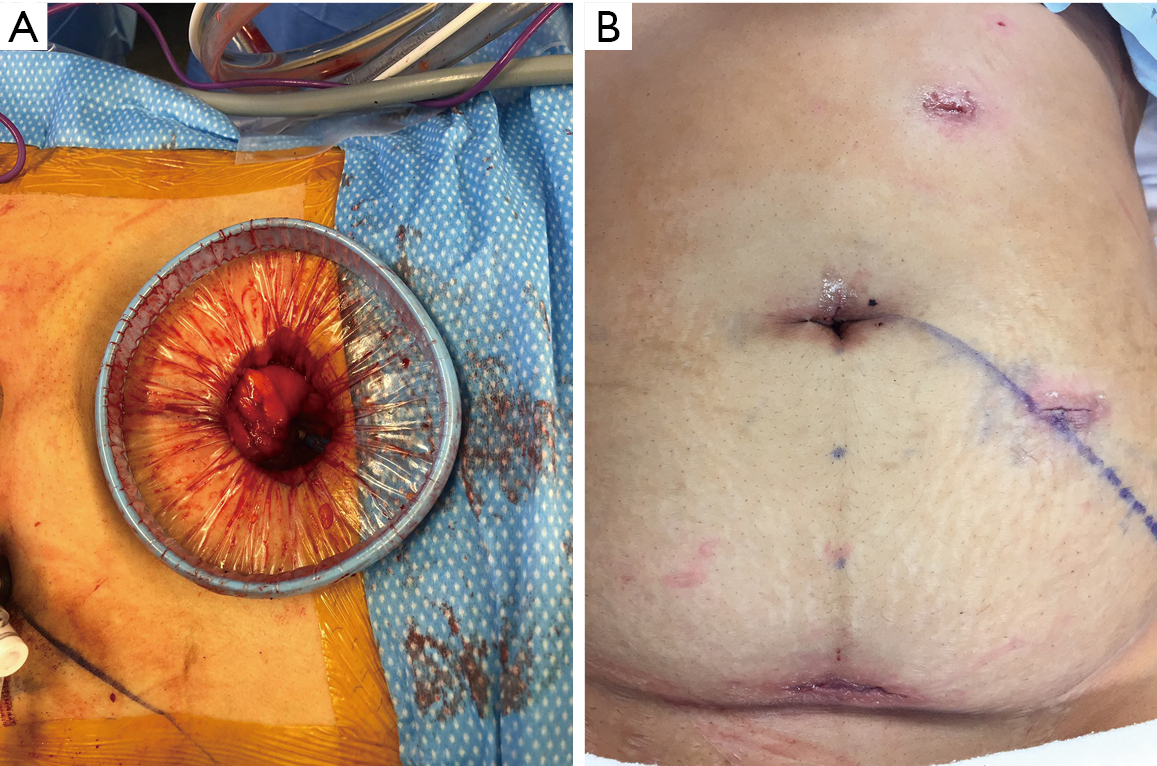 This technique has been associated with a significantly lower incidence of IH 0% to 2% (27,28). In gynecological procedures, Pfannenstiel incision is used for the majority of pelvic procedures and has shown favorable outcomes including ileus, length of hospital stay and wound infections (27,29). A retrospective cohort study of 2,148 patients undergoing laparoscopic colorectal resection was done by Benlice et al. (5) to assess the relationship between extraction site location and IH. They concluded that the preferential extraction site to minimize IH rate should be Pfannenstiel or incision off the midline whereas midline incisions should be avoided when possible.

DeSouza et al. (30) suggested two major mechanisms that protect against hernia formation after Pfannenstiel incision. They postulated that the incisions are at right angle between the anterior rectus sheath and the rectus muscle which offers a shutter valve-like action when intra-abdominal pressure is increased. Secondly, the tension lines on the anterior rectus fascia run parallel to the long axis of the incision which opposes the fascial ends.

NOSE is a technique in which the specimen is retrieved via a visceral opening that is communicating with an outside world. The most common extractions are either transanal or transvaginal. NOSE significantly reduces the surgical trauma and post-operative pain as it eliminates the need of a separate incision for the specimen extraction. A meta-analyses published by Ma et al. (35) has shown that this technique of specimen extraction has many advantages which include shorter length of hospital stay, faster return of bowel function and lower post-operative pain scores.

NOSE is of significance when treating patients with body mass index (BMI) greater than 30 as they are more prone to incision related complications and IH. However, a high BMI poses challenges to this procedure itself and an increase in BMI causes more visceral fat which may be associated with specimen bulk (37).

As a new technique for specimen extraction, this approach poses certain challenges which include disturbing an otherwise healthy organ, and the potential for seeding an unaffected organ during extraction of a neoplastic tissue (38).

Another technical problem faced by this technique is removal of proximal specimens, such as the right colon. A suitable technique for removal of the right colon is the transvaginal approach. Transvaginal NOSE has shown to be effective for both right and left sided resections. Our experience suggests caution when using the technique for extraction of large specimen and in women who have undergone prior hysterectomy (2).

This technique can be applied to patients who require either an ileostomy or a colostomy. In this procedure, the port is positioned at the future ileostomy site and the procedure can also be done through a single incision laparoscopy access system (SILS). This is done by using a stoma site as a port site as well as a site for specimen extraction, eliminating the need for another incision. The stoma site aperture is created by vertically dividing the anterior and posterior sheaths of the rectus muscle layers and splitting the muscle fibers (39).

A study conducted by Li et al. (40) analyzed the postoperative ileostomy complications in 738 patients. The patients who needed ileostomy were divided into two groups: SSE and non-stoma site extraction (NSSE) and were compared by BMI, age, comorbidities, etc. They concluded that SSE increases the incidence of stoma site complications including stoma prolapse, retraction, stenosis, strangulation, or abscess formation. Therefore, this technique should be used cautiously in patients requiring permanent ostomies or with an elevated BMI.

The increase in parastomal hernia rates in SSE might be due to the enlargement of the stoma site for extraction and resultant trauma on the fascia during the extraction process.

Laparoscopic Colon surgery has many beneficial outcomes such as lower pain, earlier recovery and shorter length of hospital stay but there are still limitations due to the minilaparotomy used for specimen extraction. Complications such as IH and wound infections continue to cause great morbidity after laparoscopic colectomy. These limitations can be minimized by the use of a carefully selected extraction site. For the majority of cases, the literature supports the use of the Pfannenstiel incision as an ideal extraction site after laparoscopic colectomy. NOSE technique is an enticing new technique that can be used in selected cases provided that the operators have the adequate skill set to perform advanced intracorporeal maneuvers.

We would also like to thank the staff of University of California Irvine, Department of Surgery for their undue support during the study design and manuscript preparation.