Since the initial description of laparoscopic totally extraperitoneal (TEP) inguinal hernia repair by Ferzli [1992] and McKernan [1993], abundant data have become available on laparoscopic inguinal hernia repairs and their outcomes compared to open approaches (1,2). Decreased wound complications, faster recovery, and decreased incidence of chronic pain are some of the advantages that drove more surgeons to adopt these techniques (3-5). Moreover, and with increased experience with the technique, the classic indications and applications have been extended to encompass the whole spectrum of groin hernias from the non-recurrent unilateral hernia to the more complex and recurrent cases. The indications and contraindications for TEP are summarized in Tables 1 and 2. A thorough understanding of the anatomy of the preperitoneal space is crucial when considering performing TEP (Figure 1A,B,C). 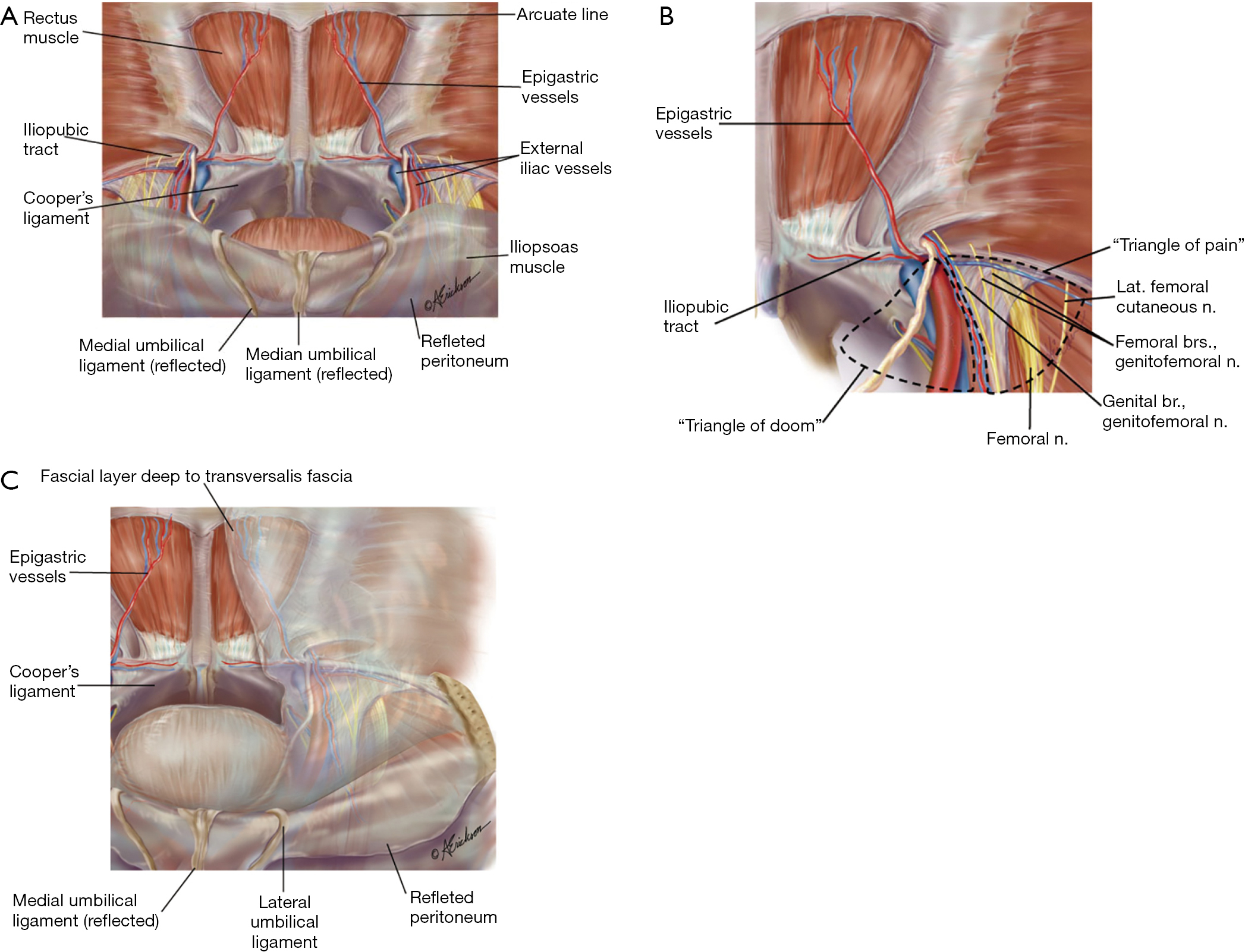 TEP and transabdominal pre-peritoneal (TAPP) are the two most commonly used approaches for minimally invasive inguinal hernia repair. Neither approach has been shown to be the better however several fundamental differences exist when comparing the two approaches. TEP completely avoids entry to the abdomen which can be advantageous in patients with prior surgery. TEP also avoids the issue of peritoneal closure and the problems associated with that closure. TEP can be performed without the use of electrocautery which may translate into less post-operative pain. When the space of Retzius is developed in TEP, 3/4 (femoral, obturator and direct) hernias are explored on the contralateral side. These hernias may not be readily identifiable by examining the peritoneal side.

TEP requires the placement of 3 trocars in the lower midline, one Hasson and two 5 mm trocars (Figure 2) (6). A 15 mm curvilinear infra umbilical incision is made and carried down sharply to the level of the fascia. The anterior rectus sheath is incised transversely off the midline to expose the rectus abdominis muscle. Avoiding the linea alba is important to avoid inadvertent entry into the peritoneal cavity. The rectus abdominis muscle is swept laterally exposing the posterior rectus sheath. The surgeon’s index finger is inserted into the preperitoneal space and is swept from side to side to develop the space and accommodate placement of the 5 mm trocars. The two 5 mm trocars are placed guided by the index finger to prevent their placement in the intra-peritoneal position. The Hasson cannula is then placed into the space under vision with the help of S-type retractors and the pre-peritoneal space is insufflated with CO2 to 10 mmHg. A 10 mm 30-degree laparoscope is then inserted and used to further develop the preperitoneal space down to the pubic symphysis using side to side motion. The use of a balloon space maker for the initial access is an option, however it adds cost to the procedure. 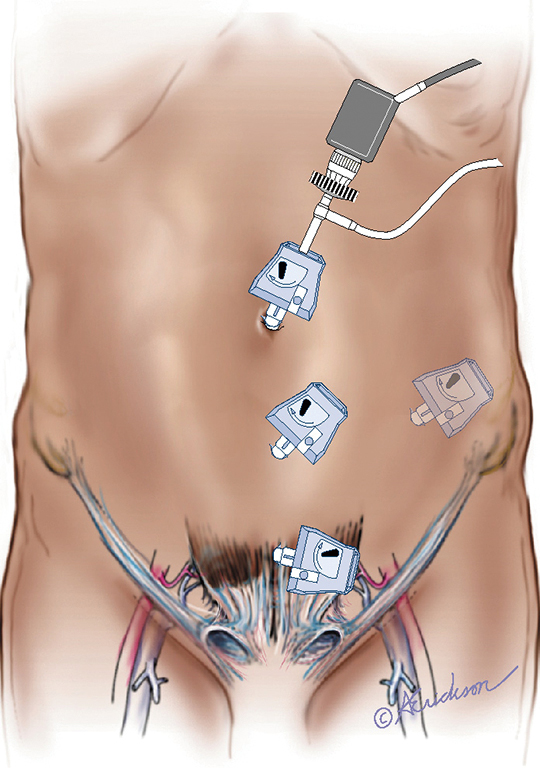 Figure 2 Trocar placement. An infra umbilical Hasson and two midline 5 mm trocars. A 4th trocar can be added if needed.

The seven steps of TEP

After placement of the trocars, a stepwise approach is critical to perform a safe, effective, and reproducible repair (7). The goal is to completely dissect the myopectineal orifice (MPO) and identify all potential sites of hernia formation: (I) direct space; (II) indirect space; (III) femoral space; (IV) obturator space. Reduction of the hernia(s) follows dissection to allow finally placement of mesh and reinforcement of the whole MPO. These seven steps are summarized in Table 3 and are described in the following text as well as the attached videos (Figures 3,4) and Figure 5. 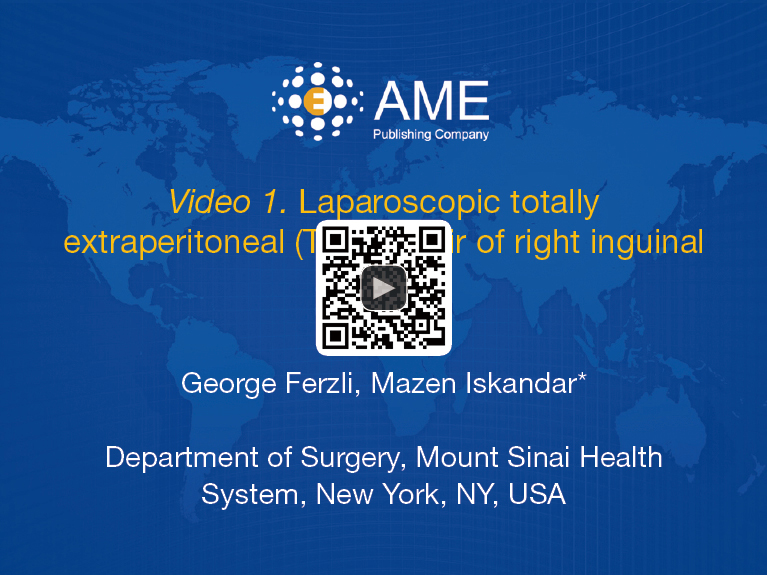 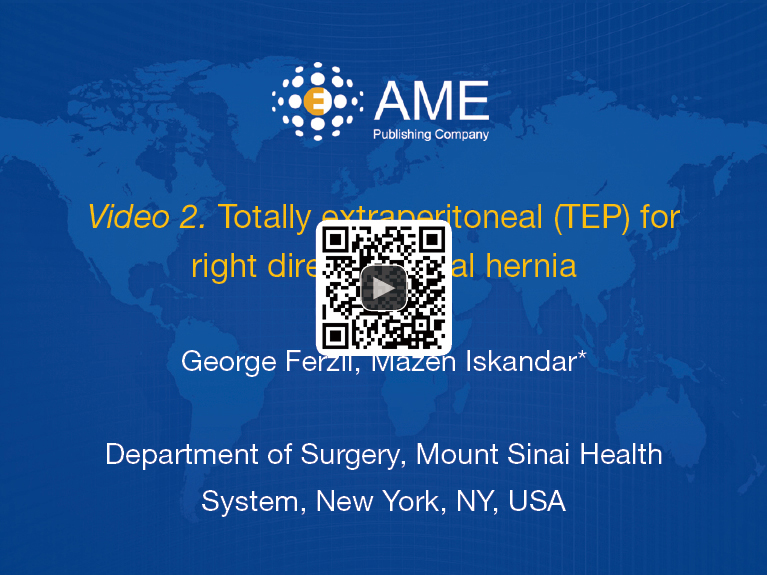 Figure 5 The seven steps of TEP. (A) The first five steps of TEP; (B) fundamentals of direct and indirect hernias. TEP, totally extraperitoneal.

Cooper’s ligament is bluntly swept clear in a medial to lateral direction while staying close to the ligament and close to the bone in a gentle and controlled manner. This will allow visualization of the femoral and obturator spaces. If a femoral or obturator hernia is encountered, they are reduced bluntly. Care must be made during reduction of femoral hernias to avoid injuring the femoral vein or the occasional corona mortis artery. Full dissection of the space of Retzius is achieved by dissecting the contralateral Cooper ligament thereby ruling out a femoral, direct and obturator hernia as well on the contralateral side.

The direct space (Hesselbach’s triangle) is identified immediately superior to the femoral space and separated by the medial aspect of the iliopubic tract. A direct hernia normally obscures the view to Cooper’s ligament and is readily identifiable during the initial dissection. A convexity or a bulge in Hesselbach’s triangle signifies the presence of a large indirect hernia. A direct hernia sac is reduced by peeling it away from the attenuated transversalis fascia and using constant and gentle traction and counter-traction (Figure 6A).

The epigastric vessels are identified and elevated anteriorly.

While elevating the epigastric vessels, the space of Bogros is developed using horizontal blunt dissection. The space is developed laterally to the level of the anterior superior iliac spine (ASIS) to allow placement of an appropriately sized mesh.

Numerous mesh products for inguinal hernia repair are available. Our preference is a 15 cm2 sheet of medium weight polypropylene that is trimmed to an appropriate shape and size, rolled and introduced into the space of Retzius through the Hasson port. The mesh is then unrolled and should extend from the midline to the ASIS and cover all hernia spaces (Figure 7). The mesh should be placed in the visceral plane of the extraperitoneal fascia in the space of Bogros to avoid contact with the nerves. No slit is placed in the mesh as this has been shown to be a factor in recurrences. We do not routinely tack the mesh in place. However, some may find it helpful to place a single tack in Cooper’s ligament to facilitate unrolling of the mesh. Also, and to ensure adequate medial overlap, tacking may be needed in the case of large direct and femoral hernias. 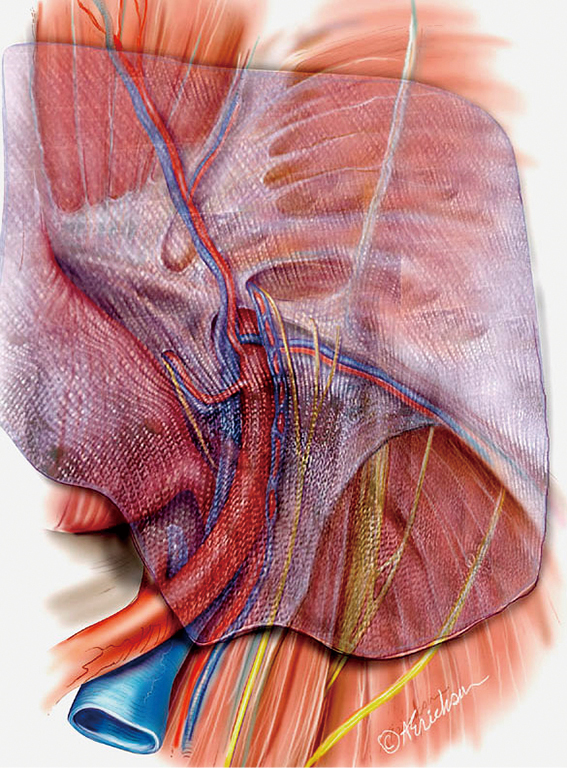 When evaluating a patient with an inguinal hernia and considering a TEP approach, several factors need to be accounted for. When taking history, questions regarding conditions that increase the likelihood of complications must be answered. Such conditions include chronic cough, constipation, and prostate problems to name a few. Modifiable risk factors such as obesity, smoking, and blood sugar control must be addressed preoperatively. The physical examination should note the size and reducibility of the hernia as well as the presence or absence of a contralateral or umbilical hernia as well as the presence or absence of nerve involvement (by looking for anesthesia, hyperesthesia or contact dysesthesia). Examination of the testicles and cord structures should be performed in men. Finally, the skin is also examined looking for rashes or the presence of fungal or bacterial infections.

Regarding patients on antiplatelet therapy or anticoagulation: Each patient should be evaluated on an individual basis, taking into account their form type of anticoagulation (anti-platelet therapy, warfarin therapy, non-VKA oral anticoagulants, heparin), duration of therapy, risk factors, and other comorbidities. Involving the patient and their treating physicians in the decision- making process would help mitigate risk and stress associated with such cases. Keeping all of those factors in mind, with experience and meticulous dissection, TEP can still be done in patients on antiplatelet therapy or anticoagulants.

Every attempt must be made to reduce an inguinal hernia on the operative table after induction of anesthesia. If successful, this simple maneuver will make the operation much easier.

Prior operative reports must be obtained in cases of recurrent hernias looking for the presence and type of mesh, plugs, or tacks and the intra-operative findings.

There are no data to support routine pre-operative antibiotic prophylaxis for laparoscopic inguinal hernia repair.

In TEP, the umbilicus-pubis distance and panniculus thickness are critical for trocar placement such that in obese patients with a thick pannus and a lower umbilicus, inadequate placement of the trocars can lead to a decreased working space and excessive torque (see Figure 8). Flexing the operating table can help augment the umbilicus-pubic distance and widen the operative field.

TEP could also be performed with 2 mm instruments also known as needlescopic surgery (12).

When reducing an indirect sac and separating it from the cord structures, the dissection should point towards the distal end of the sac as it tapers close to the internal ring. Should inadvertent tearing of the peritoneum occur, it is easier to fix in that location after complete sac mobilization. The tear can be closed with an endoloop or clips. We do not recommend Veress needle decompression if pneumoperitoneum occurs as the space does not collapse if adequately dissected following the seven described steps. The space of Retzius is especially resistant to collapse when widely dissected and is used as the initial working space for mesh placement.

When dealing with complex and incarcerated hernias a few extra steps may prove helpful. Insertion of an additional 4th 5 mm trocar may be needed to facilitate the exposure (13,14) (Figure 1). The epigastric vessels can be divided to facilitate the dissection of the sac and to prevent the wrapping of the mesh. In the case of large and incarcerated hernias, the transversalis sling is divided with hook cautery at the 10 o’clock position to allow complete reduction of the sac (Figure 10). If a testicle and tunica vaginalis are present in the space, it is preferable to divide the sac rather than reduce it to minimize de-vascularization. If an incarcerated hernia is not able to be reduced despite relaxing incisions and adequate dissection of the preperitoneal space, a hybrid approach can be done (15). A counter incision is made and the hernia is reduced in a standard open fashion. The mesh is then unrolled in the pre-peritoneal space. 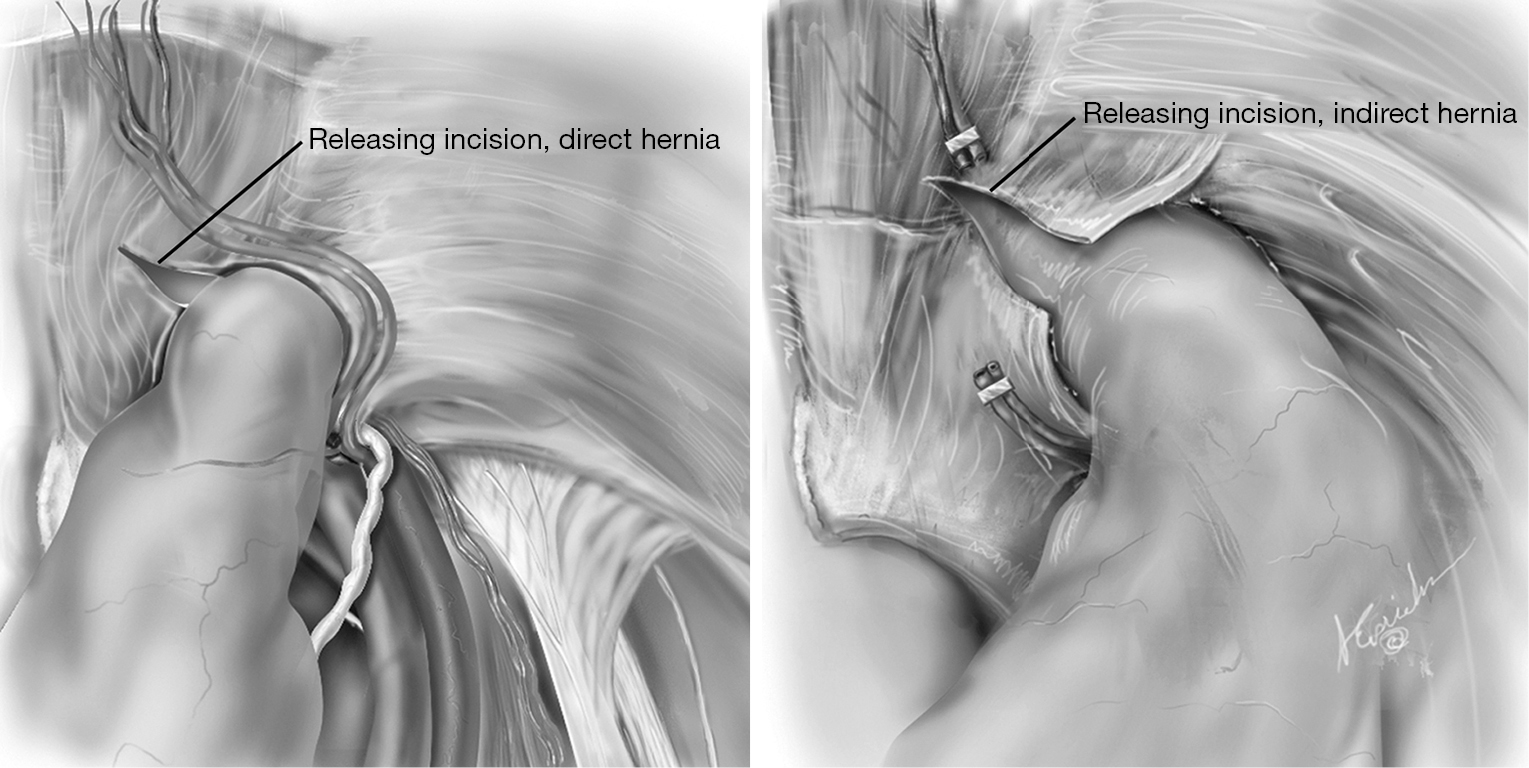 Routine mesh fixation is not recommended due to concerns of acute and chronic pain without a decrease in hernia recurrence (16,17). Should mesh fixation prove necessary such as in the case of large direct defects, mesh fixation should be done in 3 locations and preferably with an absorbable tacker. The 3 locations are: pubic symphysis, Cooper’s ligament, and anterior abdominal wall lateral to the epigastric to avoid the triangle of pain and triangle of doom.

In the preperitoneal space, deep to the transversalis fascia, is a fascial layer analogous to Scarpa’s fascia referred to as the spermatic fascia or extra-peritoneal fascia (Figure 1C). The inferior epigastric, the iliac vessels, the nerves are found external to this layer. Dissection should be carried in the plane between the peritoneum and the spermatic fascia. This signifies that as the peritoneum is peeled off the epigastric vessels, there will still be a thin translucent layer of tissue covering them. Leaving this thin layer intact will provide a barrier between the mesh and important structures such as nerves and the vas deferens and help reduce the chance of ischemic orchitis, infertility, and chronic pain (7).

TEP after TEP or TAPP is a challenging procedure requiring proficient knowledge in anatomy and meticulous dissection and can be performed if an open anterior approach has also failed (18). The challenges arise from adhesions, leading to obscuring of normal anatomical landmarks and loss of working space with difficulty in developing the spaces of Retzius and Bogros. The key features of a TEP after TEP or TAPP are as follows:

Application of ice packs and administration of non-steroid anti-inflammatory drugs will help decrease the swelling in addition to providing analgesia without increasing bleeding.

Modus operandi, mastery of the anatomy, and meticulous direction are the 3 M’s that need to be remembered in order to perform TEP with reproducibility, safety, efficiency and good outcomes. Mastery of the anatomy of the versatile pre-peritoneal space allowed surgeons to become facile in operations such as prostatectomies and retroperitoneal node dissections (19). When performed sequentially and followed religiously, the seven steps described here allow for improved outcomes and serve as a good teaching base for surgeons training to perform TEP.

All illustrations are courtesy of Anne Erickson CMI.