Langerhan’s histiocytosis, or histiocytosis X, is a disease that involves multiple organ systems and can be a rare cause of secondary pneumothorax in children. Management of Langerhan’s histiocytosis involves multiple medical disciplines and primarily relies on long term chemotherapy agents (1). Surgery, namely total pleurectomy, is rarely necessary and is described only in a few case reports, but to our knowledge, this has not been discussed using the thoracoscopic approach in a 1-year old patient.

We discuss a 12-month-old child who initially presented to an outside hospital with respiratory distress and was found to have bilateral pneumothoraces, jaundice and a rash. Bilateral chest tubes were placed and the diagnosis of Langerhan’s histiocytosis was ultimately secured by skin biopsy. She started on weekly vinblastine and daily prednisone but had a prolonged hospital course due to a persistent right pneumothorax and a continuous air leak. Removal of the remaining chest tube resulted in prompt readmission and replacement, and she then transferred to our hospital for further care.

At our institution, treatment for her disease continued with vinblastine for a total of four doses over 4 weeks. She had a continuous air leak and there was concern for a bronchopleural fistula that was potentially exacerbated by continuous suction. A chest tube water seal test resulted in prompt accumulation of extra-pleural air and respiratory decompensation that resolved after the chest tube was upsized from an 8.3 Fr pigtail to a 12 Fr tube. A continuous air leak was present. After extension consultation with national experts, her treatment course was changed to cytarabine 100 mg daily for 5 days on a 4-week cycle and the steroid was weaned. After four doses of vinblastine and two rounds of cytarabine—a total of 7 weeks on chemotherapy agent treatment—she continued to have a continuous air leak and had failed several water seal trials. She decompensated rapidly when the chest tube clotted, requiring transfer to the intensive care unit and chest tube replacement or a second chest tube. CT imaging confirmed extensive, bilateral involvement of lung with large cystic spaces throughout the parenchyma, and a sizeable pneumothorax, despite chest tube drainage (Figure 1). Based on outside consultation and prior case reports that indicated success with pleurectomy, we decided to offer surgical intervention. At 8 weeks of treatment, she underwent a video-assisted thoracoscopy and total pleurectomy. She was extubated on postoperative day 1. She continued to have an air leak and a small pneumothorax for several days after surgery until pleural apposition and resolution of her air leak were achieved at postoperative day 7. We maintained her chest tube to suction for another 7 days and her chest tube was removed successfully after a water seal test.

We performed a videoscopic thoracentesis. We entered the chest through a prior chest tube sire on the 4th intercostal space in the midaxillary line, introducing a 4 mm trocar and establishing insufflation. Entry into the chest was facilitated by the large pneumothorax. Additional 3 mm ports were subsequently placed (Figure 2). The surface of the lung was noted to be diffusely diseased and there were confluent areas of bullous changes on all three lobes (Figure 3A). No active bubbling was appreciated. The working ports were inserted in line with the camera trocar transversely across the chest to accommodate pivoting from the apical pleurectomy and the basilar pleurectomy. The pleura was scored with hook electrocautery along the 5th rib (Figure 3B). The pleura was dissected away from the underlying bone and muscle until the second rib was reached. We continued this anteriorly to the limit of the pericardium. We then turned our attention to the basilar pleurectomy. Again, the pleura was dissected away from the underlying muscle from the 6th rib to the diaphragm. A 12 Fr chest tube was placed and the lung re-expanded under direct visualization. The patient remained intubated and returned to the intensive care unit. Total anesthesia duration was 3 hours and 30 minutes and estimated blood loss was 5 cc. 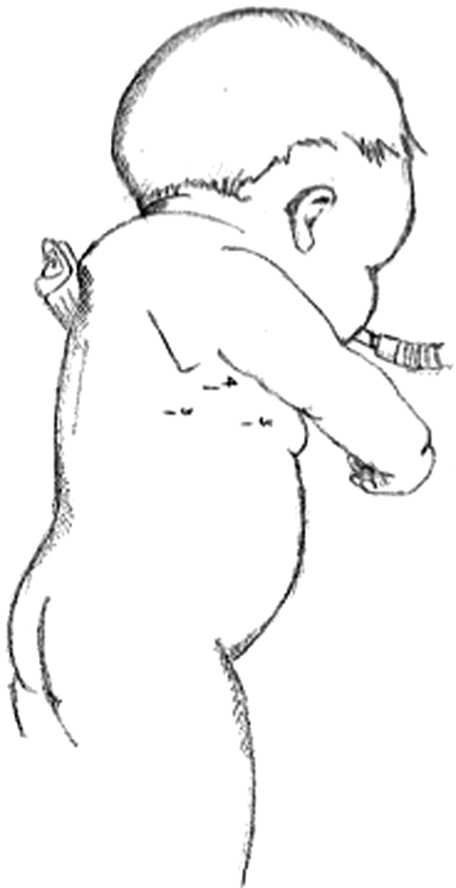 One year after our intervention, the patient continues to progress on her cytarabine therapy and has been enrolled in an experimental clofarabine based protocol. She continues to have extensive liver and lung involvement but has had no recurrent pneumothorax.

Langerhan’s histiocytosis is a disease that involves many organs with an incidence rate of five cases in 1,000,000 children. Presentation varies from self-limited lesions to life-threatening disseminated disease. Due to the broad spectrum of clinical manifestations, diagnosis of Langerhans cell histiocytosis (LCH) is challenging. Excisional biopsy that demonstrates histiocytes with surface expression of CD207 and CD1 are pathognomonic for disease. Systemic LCH involves “risk organs”—liver, spleen, hematologic involvement—and is associated with a worse prognosis (2). Chemotherapy remains the mainstay in the treatment with vinblastine and prednisone as the standard of treatment in children (3). Over the course of our patient’s treatment, respiratory status worsened without improvement in disease burden. Due to this she was deemed to be failing LCH III guideline therapy of vinblastine/prednisone and required a more aggressive approach to treatment.

Surgery in the treatment of LCH

Langerhans histiocytosis is rare cause of pneumothorax that usually requires surgical attention for chest tube placement and administration of pleurodesis to the pleural space. Rarely, more invasive surgical interventions such as bleb resection, wedge resection, and total pleurectomy may be needed to manage severe pulmonary LCH. It has been demonstrated that patients who present with pneumothorax have a greater probability of recurrence. In isolated pulmonary LCH, 10–30% of patients present with pneumothorax as the first symptom. In the case of recurrent pneumothorax, pleurodesis is proposed as mainstay of treatment (4,5).

Dejima et al. describes a case report of a continuous air leak 4 days after chest drainage in an adolescent who presented with a pneumothorax. Only under thoracoscopic view were multiple bullous lesions in the apical lung in addition to small nodular lesions. Pathology confirmed the diagnosis of pulmonary LCH and chemotherapy was then initiated (5). In the adolescent population, thoracoscopic approach is a well establish and effective procedure for primary spontaneous pneumothoraces and can be employed when further investigation is needed (1). In the infant population, however, thoracotomy is the frequent method of chest exploration.

In the management of this patient, the authors strongly considered open thoracotomy because pleural scarring from an open procedure would be advantageous in this particular instance. However, thoracotomy is associated with long-term musculoskeletal deformities in children despite muscle sparing techniques. Scoliosis and chest wall anomalies are potential long-term complications and has been reported neonates who underwent open repair of esophageal atresia. It has also been described in patients who underwent lateral thoracotomy for patent ductus arteriosus and coarctation of the aorta (6-8).

Thoracoscopy and pleurectomy, a well-established and effective procedure for primary spontaneous pneumothorax in the pediatric population, was employed in our 12-month-old patient. We specifically chose to perform a total pleurectomy from the second rib to the diaphragm as opposed to the apical pleurectomy that is usually used in primary spontaneous pneumothorax with the goal of avoiding long term effects of thoracotomy in an infant.

This case study describes the successful management recurrent pneumothorax from severe pulmonary LCH using a minimally invasive surgical technique in a 1-year-old patient. The application of thoracoscopy to manage secondary pneumothorax due to LCH in a patient this young has never been reported before.

We would like to acknowledge the pediatric surgery, pediatric oncology, and pediatric critical care teams involved in the care of this patient.

Informed Consent: Written informed consent was obtained from the patient for publication of this case report and any accompanying images.